The Cloud Of Tobacco Smoke Is Choking The World 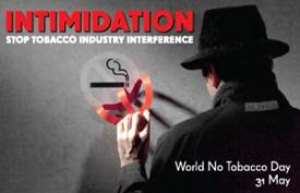 (CNS): Tobacco is the single most preventable cause of death in the world today. Yet it kills nearly 6 million people each year, which includes some 600,000 non-smokers who die due to exposure to second-hand smoke. In 2004, children accounted for 31% of these deaths. Almost half of the world's children (through no fault of theirs) regularly breathe air polluted by tobacco smoke which is said to carry more than 4,000 chemicals, of which at least 250 are known to be harmful, and more than 50 are known to cause cancer. Tobacco is one of the greatest risk factors for Non Communicable Diseases which are responsible for 63% of all deaths globally. Also 50% of all deaths from lung disease are linked to tobacco.

Civil society activists along with The International Union Against Tuberculosis and Lung Health (the Union), are happy to note that 174 countries, representing 87.4% of the world's population, are now parties to the world's first public health treaty –the WHO Framework Convention on Tobacco Control (FCTC) treaty, and are legally obligated to pass, implement and enforce tobacco control legislation. As a result 59 countries are now monitoring tobacco use; 42 countries mandate pictorial health warnings; and 27 countries have raised tobacco taxes to more than 75% of the retail price. Yet, a lot more needs to be done in the high burden low/middle income countries to curb the epidemic of tobacco.

India is the second largest producer as well as consumer of tobacco. Every year 1 million deaths occur in our country due to tobacco related diseases, where 34.6% adults are tobacco users. Although only 14% adults are smokers as compared to 26% smokeless tobacco users, the number of cigarettes sold in the country is increasing. According to the latest available data, domestic consumption of cigarettes in 2011-12 has increased by 4.19% over the previous year. It is no surprise that almost 40% of tuberculosis deaths in the country are associated with smoking. Moreover flavoured, scented forms of chewing tobacco are very popular across all segments of society and taking a heavy toll by way of oral cancer and other diseases of the mouth. Despite good anti-tobacco laws in place, their implementation still remains a problem.


According to the global adult tobacco survey 2010, China holds the dubious distinction of having the maximum number of male smokers at 52.9%, it being as high as 63% in the 45-64 years age group. Dr Yan Lin, Director of The Union China Office laments that, “At the national level there is no tobacco control legislation. But right now the Union, supported by the Bloomberg philanthropy, is supporting 14 tobacco control projects, most of which focus on support for the government for smoke free legislation to protect non smokers by promoting smoke free public and work places. In some big cities this law has already been approved by the people's congress.”

Dr Lin is however happy that, “On the eve of the World No Tobacco Day this year, the Ministry of Health will launch a Tobacco Control Ministry Report in Beijing, which for the first time will document how harmful smoking is for people's health. The Ministry will also issue the pictorial warnings showing the different diseases caused by tobacco smoke, and also advocate for protecting children and other people from tobacco smoke and second hand smoke. This will be a great achievement.”

4.8% of the world's smokers (57 million) reside in Indonesia, making it the third highest consumer of tobacco. Smoking kills at least 200,000 people annually. Indonesia has the world's highest percentage of young smokers and it is estimated that about a million children under the age of 16 smoke and one-third of the Indonesian children try smoking before the age of 10. More than 97 million non smokers are regularly exposed to second hand smoke, including 70% of all children under the age of 15.

Dr Tara Singh Bam, Technical Advisor, Tobacco Control in Indonesia and Nepal, said that, “It is perfectly legal for a child of any age to buy and smoke cigarettes in Indonesia. Although nearly half of the population lives on less than USD 2 a day some surveys show that Indonesian poor households spend about 22% of their monthly income on tobacco, In Indonesia, healthcare costs attributed to tobacco-related illnesses amount to 1.2 billion USD each year. Indonesia has yet to sign the FCTC. However at the provincial level, 100% smoke-free policy is being implemented in 10 cities (including Jakarta and Bali) and is in progress in 20 other cities. Also, more than 20 Mayors have joined an alliance to expand smoke free policies, advocate for FCTC ratification and adopt other tobacco control provisions through legislation and regulation.

Irina Berezhnova, Director of The Union Russia Office informs that, “There are nearly 43 million tobacco consumers in the Russian Federation, where smoking takes the lives of 330 to 400 thousand people every year. Although smoking is higher amongst males at 60.2%, female smoking has been noticeably growing in the last 15 years and now stands at 21.7 % which is the second highest prevalence in the world after Poland. Teenage smoking is very high with 30.1% boys and 24.4% girls smoking in the age group 13-15 years.” “The current Federal Law on Smoking Restrictions allows for specially designated smoking areas which makes smoking possible in all public places. There is no enforcement and no penalties for breaching the law. Tobacco advertising is restricted in print media to first and last page, and all forms of tobacco promotion and sponsorship are allowed. Cigarettes are very cheap in Russia because of exceptionally low tobacco taxes. However, in 2011, the Ministry of Finance decided to increase the share of the excise tax in retail price which may increase by 50%. Also, the Ministry of Health has issued a decree mandating new graphic health warnings on all cigarette packs with effect from May 11, 2013 which will cover 50% of the backside of each pack, with 30% of the front having a single bold text warning that tobacco kills. In August the Ministry of Health and Social Development publicly presented the draft of anti tobacco legislation "On Protection of Health of Citizens against Harmful Effects of Tobacco Consumption" addressing all FCTC requirements. This has been submitted to the government on 20th May 2012.”

Latin-American countries too have a high a prevalence of smokers ranging from 15% to 40%. Just to name some countries the prevalence in Brazil is around 17%, Mexico 20%, Argentina 27%, and Chile 40%. Mirta Molinar, Regional Coordinator, Tobacco Control in Latin America informed that, “The promotion, sponsorship and advertising tactics used by the tobacco industry are increasing the consumption more quickly. Many countries in this region have comprehensive legislation for effective tobacco control measures such as increasing tobacco taxes (Mexico), having 100% smoke free environment in work places and enclosed public places (Argentina declared the whole country smoke free last year), banning advertising/sponsorship/ promotion, (Brazil banned retail display of tobacco products), and printing health messages and pictorial warnings on cigarettes packs. Other good examples are Costa Rica, Colombia, Uruguay, Ecuador, Guatemala, Panama, and Peru. However, all these measures will have to be implemented together, as much as possible, to have a greater impact on the population.”

Dr Ehsan Latif, Director of Tobacco Control agrees that “Pakistan has good anti smoking laws but they are loosely implemented. Tobacco control takes a backseat in front of security and poverty problems. Bangladesh is setting up task forces, which regularly go out and inspect different places. But there are problems relating to infrastructure and implementation still has its challenges. The government must have proper infrastructure for regular implementation similar to having food inspectors, anti smuggling teams, so that it becomes incorporated in the existing set up rather than developing parallel structures just to control smoking in public areas or to monitor industry advertising.”

It is clear that governments across the world are slowly gearing up to find lasting solutions to curb the menace of tobacco which is not only a public health priority but is also directly connected to the economy of a nation and social justice of its populace. Still many challenges remain to be overcome as rightly pointed out be the Union—less than 11% of the population is covered by comprehensive national smoke-free laws; no low-income country yet mandates the required pictorial health warnings covering at least 50% of the front and back of tobacco packages; 46% of the world's population lives in countries that still permit free distribution of tobacco products; and awareness about the health hazards of tobacco use is low in several high burden countries.

On this World No Tobacco Day let all of us pledge to destroy the monster of tobacco, before it destroys us. Amen!