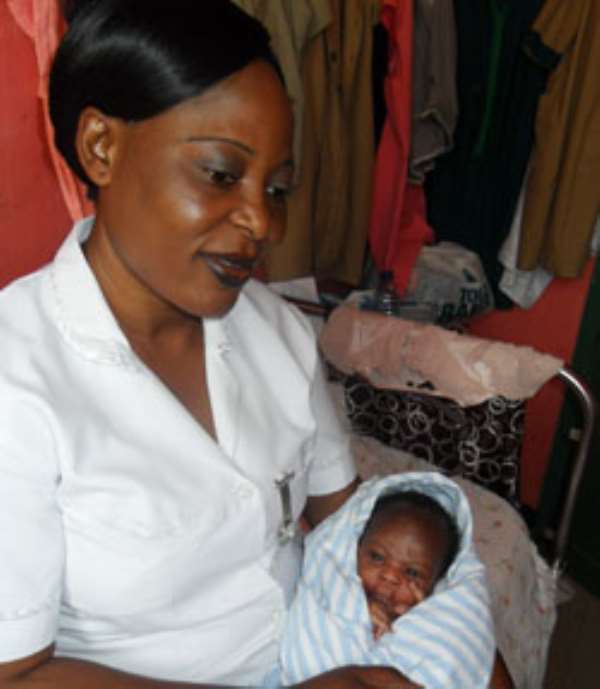 A NEWBORN baby with its umbilical cord still attached was found in a pit of a KVIP at Bekwai in the Ashanti Region on Sunday morning.

The infant, who has since been christened Derrick Nyamekye Donko by hospital authorities at the Bekwai Government Hospital, was found in a shopping bag made of fertilizer sack inside a pit of a KVIP at Nampansa, a suburb of Bekwai.

A plumbery staff of the hospital, whose name was only given as Eric, discovered the baby around 6:00am on Sunday while scavenging rubbish at the toilet facility where he had gone to work, a Senior Nursing Officer at the maternity ward told DAILY GUIDE .

Odette Anaba said the abandoned baby, with the exception of its orifices, was covered in human faeces and maggots, and still had its umbilical cord attached when he was rescued from the pit of the KVIP.

According to him, the Social Welfare Department was planning to take custody of the baby for further action.

Dr. Manu said the case was reported to the police for investigations to be done and the parents of the abandoned baby discovered.

An eyewitness who spoke to the paper on condition of anonymity disclosed that the abandoned baby was discovered by a scavenger when he was trying to get rid of the refuse dumped at the toilet facility.

'I believe that the abandoned baby is a lucky child. The baby was found in one of the holes of the KVIP, probably shortly after he was dumped .  It was here at the hospital that the baby was finally cleaned up and his umbilical cord removed ,' the Senior Nursing Officer had earlier stated.

She narrated that while Eric was trying to bring out a bag from the pit, he realized it was heavy and to his surprise detected some movement.

According to Ms. Odette Anaba, the plumber, out of curiosity, looked inside the bag and saw the baby.

DAILY GUIDE gathered that the man alerted some residents who assisted him to take the baby to the Bekwai Government Hospital.