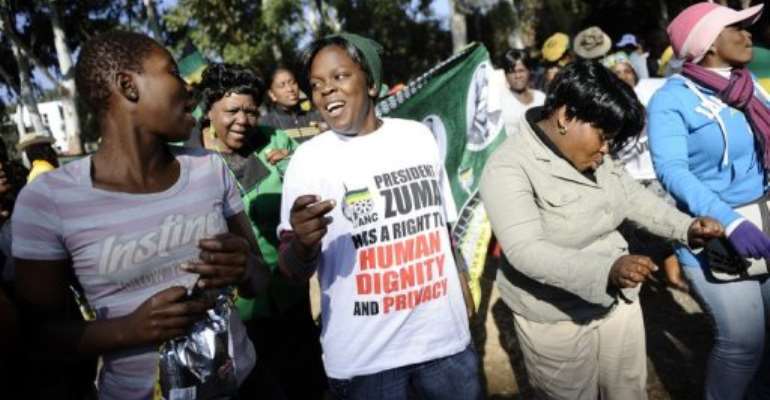 JOHANNESBURG (AFP) - Some 1,000 supporters of South Africa's ruling ANC marched on an art gallery Tuesday to protest a painting depicting President Jacob Zuma's genitals, which a party leader said the gallery had agreed to pull from its website.

The African National Congress had expected at least 15,000 people to come protest one of the most controversial artworks in the country's post-apartheid history, but only about 1,000 turned up, most of them bussed in from surrounding provinces.

Decked out in the black, green and gold of the ANC, they marched about two kilometres (1.2 miles) along one of the city's busiest roads to the gallery in the upmarket neighbourhood of Parkwood, where riot police formed a barrier between them and the gallery.

"The Goodman Gallery has agreed to remove the painting from the website," ANC secretary general Gwede Mantashe told protesters.

The row erupted when the gallery put up a collection of works by satirical artist Brett Murray taking a harsh look at the ANC.

But the piece that sparked the most outrage was the painting of Zuma mimicking a pose by Vladimir Lenin in a Soviet-era propaganda poster -- but with his penis exposed.

Critics branded it racist and a violation of Zuma's right to dignity, arguing it is deeply offensive in African culture to expose an elder's genitals.

The ANC claimed victory after two vandals last Tuesday smeared the work with red and black paint, prompting the gallery to pull it from its walls.

Mantashe hailed one of the vandals -- who was on stage with him Tuesday dressed in a black hoodie -- as a hero who "covered" Zuma's shame.

The gallery, which was closed last week, had on Tuesday pulled down all materials from the exhibition.

"Goodman Gallery respect your right to protest," read a sign posted on the gallery's shop windows in big capital letters.

Protesters sported tee shirts with messages such as "President has the right to human dignity and privacy" and "We say no to abuse of artistic expression".

Dorcas Ntshaodinsane, a protester in her 50s, said: "We are coming here to protest against discrimination. It is discrimination, you just don't take any person and make him naked, whoever he is."

The ANC had also applied for an interdict compelling the gallery and Sunday newspaper City Press to remove all public images of the work.

City Press had covered the painting in an art review, but on Monday gave in to pressure to remove an image of it from its website, following calls to boycott the paper.

"You can also buy the City Press now, just not last week's copy," he said.