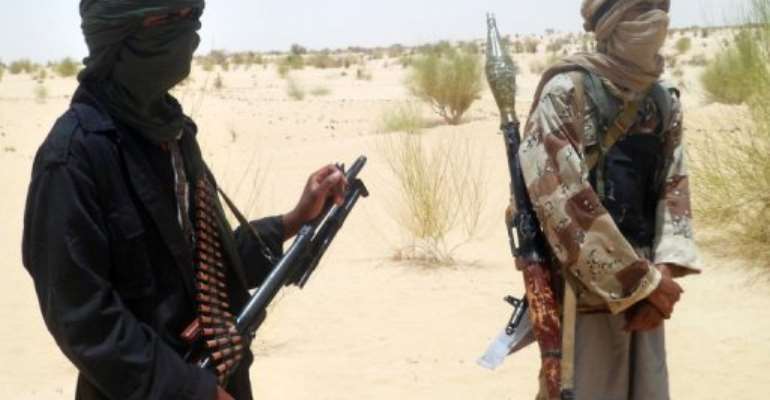 "We have refused to approve the final statement because it is different from the protocol agreement which we have signed," said Ibrahim Assaley, the Tuareg rebel National Liberation Front of Azawad (FNLA).

A draft of the statement by Ansar Dine (Defenders of Faith) spoke of applying "pure and hard" Islamic Sharia law and banning non-Muslim humanitarian groups from the area, Assaley told AFP by phone from Gao, where the unity talks took place.

"It is as if they want us to dissolve into Ansar Dine," complained the representative of the secular Tuareg rebels. "That is unacceptable."

Asherif said the original accord had been merely a basis for working discussions and that the deal was on a "take it or leave it" basis. Ag Ghaly would travel to Gao on Tuesday morning "to solve the problem", he added.

Ansar Dine is backed by Al-Qaeda's north African branch, known as Al-Qaeda in the Islamic Maghreb.

The original declaration of a separate Islamic state in Mali's vast desert north, an area larger than France, had come at the weekend.

The short-lived accord was hammered out after weeks of sometimes fraught discussions between two groups that have long held separate objectives and ideologies.

In January, the Tuareg rebels launched an offensive against the Malian army, which was heightened with the arrival on the scene of Ansar Dine, which wants Islamic Sharia law imposed throughout the land-locked west African nation.

A coup by Captain Amadou Sanogo and a group of low-ranking officers ousted the government in Bamako on March 22, saying it was handling the Tuareg rebellion incompetently.

But the coup only opened the way for the Tuaregs, Ansar Dine -- led by the charismatic Ag Ghaly -- and criminal groups to occupy the north.

"The government of Mali categorically rejects the idea of the creation of an Azawad state, even more so of an Islamic state," Hamadoun Toure, information minister in the transitional administration, told AFP on Sunday.

The West African bloc ECOWAS on Monday also rejected the rebel declaration of independence and repeated an earlier threat to take "all necessary measures" to keep Mali intact.

It said the move would "only worsen the situation for a population that has already been the victim of all sorts of atrocities and hardships in the occupied area of Mali, as well as expose the entire region to the most serious dangers regarding peace and security".

Mali's transitional leaders have stressed their wish to restore the country's territorial integrity but seem unable to guarantee their own safety, let alone mount a credible challenge against the north's new masters.

The uncertain security situation was highlighted by a recent assault on 70-year-old interim president Dioncounda Traore.

Some 50 people have been arrested in the investigation into the attack, the government announced Monday.

Traore's entourage said tests had revealed nothing alarming and that he was expected back in Mali in the coming week following a trip to Paris for medical attention.