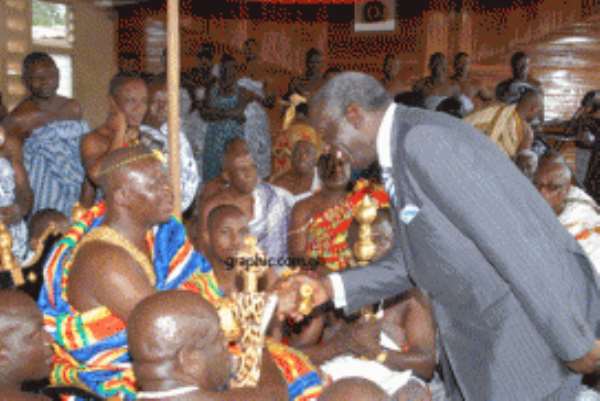 Former President John Agyekum Kufuor, and the former presidents of South Africa and Germany, Thabo Mbeki and Kohler Horst, have unveiled a plaque for the establishment of a library and museum at the Kwame Nkrumah University of Science and Technology in Kumasi.

The project dubbed: “John Agyekum Foundation”, is expected to be completed within a year.

Unveiling the plaque moments after the three leaders had paid a courtesy call on the Asantehene, Otumfuo Osei Tutu II, at the Manhyia Palace, President Kufuor described the occasion as a great day in his life.

Explaining further, he said the project, designed to be a centre of excellence on the continentto promote good leadership, good governance and meaningful development in Ghana, was the first of its kind in the country by any former President.

“This structure, which comprises a library and a museum is the first ever by any former President in the country and the expectation is that it will be completed on schedule for me to realise my set objectives,” former President Kufuor said.

He said his vision was not only to inspirethe present and future generations to delve into good leadership and governance that would enhance sustainable democracy in the country, but also to galvanise them to embark on best practices for meaningful socio-economic development.

Earlier at the Manhyia Palace, former President Kufuor paid glowing tribute to Otumfuo the Asantehene, Osei Tutu II, for the tremendous support he offered the former president during the his tenure.

He said as Chancellor of the Kwame Nkrumah University of Science and Technology, Otumfuo Osei Tutu also collaborated with the university’s authorities to offer him a large tract of land to develop the John Agyekum Foundation.

He said it was in line with the tremendous support he received from the Asantehene that the former Presidents of South Africa and Germany, Thabo Mbeki and Kohler Horst, accompanied him to pay homage to Otumfuo Osei Tutu and support him to inaugurate the project.

In his remarks, the former President of Germany, Kohler Horst, also commended Otumfuo Osei Tutu for his foresight, which he said had made it possible for him to receive international recognition.

Recalling his first visit to the Manhyia Palace some years back and the reciprocal visit by the Asantehene to Germany, Mr Horst expressed the hope that the cordial relations that had existed between Ghana and Germany would be intensified and sustained for their mutual benefit.

He said as President of South Africa he enjoyed the tremendous support of the Asantehene who also visited him and gave the assurance that he would return the visit to the Manhyia Palace to cement the cordial relations that existed between them.

In his remarks, Otumfuo Osei Tutu commended former President John Agyekum for establishing a foundation that sought to inspire the youth to commit themselves to the promotion of good governance, leadership and developmenton the continent.

“The establishment of the John Agyekum Foundation is very remarkable because it would cause the present and future generations to honour you as a former President,” he noted .

Otumfuo Osei Tutu said for African leaders to immortalise their reigns, it was important for them to initiate policies and programmes that would not only be of tremendous benefit for the ordinary people, but also be a living testimony for generations unborn.