President Mills must step down for Mahama Now! 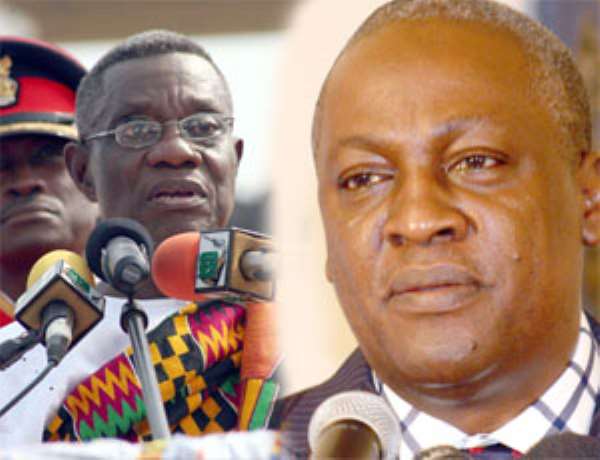 Ghanaians Abroad Against Aorruption(GAAC) are united in the belief that the President of Ghana Professor John Evans Atta Mills has woefully failed the people of Ghana by allowing sleaze and corrupt acts to be institutionalised in his government. We believe he has supervised the destruction of our country's moral fibre and has allowed ministers to connive with individuals to steal money belonging to the people of Ghana.

We therefore call on him to honourably resign with immediate effect and call on the Vice President of the Republic, Mr John Dramani Mahama to take over and institute an independent public inquiry into

a. The circumstances leading to the award and payment of Judgement debts to Alfred Agbesi Woyome, a businessman and alleged financer of the NDC party

b. The circumstances in which he authorised the payment of 90 million euros judgement debts to Construction Pioneers

c. The payment of judgement debts to Africa Automobile company to the tune of over 20 million dollars

d. The disappearance of over 120 million US dollars from Get-fund projects, meant to improve our Education infrastructure between January 2010 and November 2011

e. The use of state institutions such as the Ministry of Energy ,to siphon oil proceeds worth 125 million US Dollars into offshore accounts in Gibraltar, the Maldives, Belize, The Turk and Caicos Islands, Singapore, Qatar and Panama.

f. The exact role of Professor Kofi Awoonor, Chairman of the Council of State in signing government contracts and supervising appointments of ministers and deputies and a conflict of interest in the award of a contract to a company worth 35 million Dollars to build offices for members of the council of state by a company owned by him.

g. The role of Dr George Sipah Yankey and Dr Kwesi Botchwey, in in the award of Gas contracts worth over 800 million Dollars to Luka Oil, a Russian company

h. The circumstances of how one Larry Adjetey, a member ruling the NDC managed to sell Oil blocks off the coast of Keta and Saltpond to unknown foreign companies and made over 70 million Dollars between 2010 and 2011, with the knowledge of the President The Deputy finance Minister Fiifi Kwetey and the Energy Minister Mr Joe Oteng Adjei in a secret project codenamed “FLYING BIRD”.

Our Country is on its knees with economic hardship ,damaging unemployment and poor health facilities. We call for a house cleaning of government and for the people of Ghana to rise up and stop the rot.

President Mills must step down and make way for Mr John Mahama for Ghana to have a clean corruption free, transparent government, period!

Regulatory agencies to begin random checks at offices to ens...
28 seconds ago