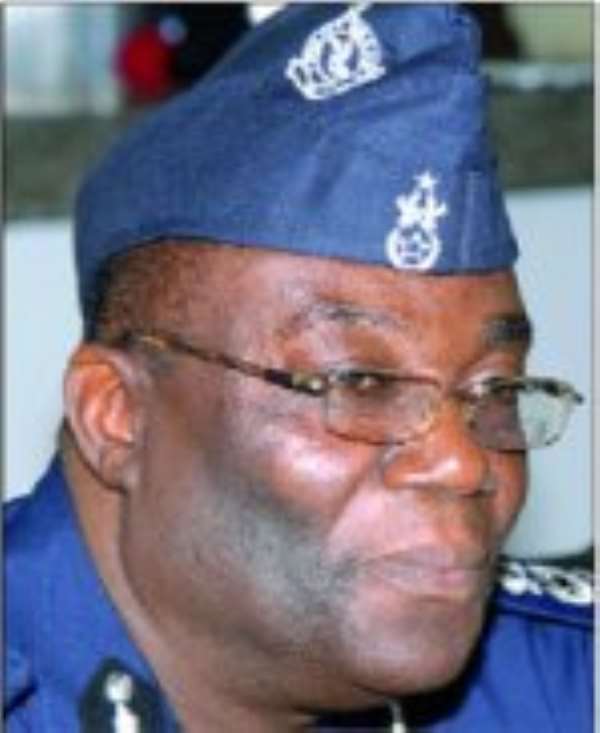 Inspector-General of Police, Mr Paul Tawiah Quaye - His men are accused of extortion. Recruits who are due to pass out at the Police Training School in Kumasi have accused some of their instructors of allegedly extorting money from them.

They claimed that three of the 12 drill instructors at the school had, since January this year, been collecting GH¢10 from each of the 232 recruits every month.

But the drill officers have denied the allegation, saying it was being perpetrated out of malice and hatred.

According to the spokesman of the recruits, who spoke on condition of anonymity, any recruit who failed to pay the money from his meagre monthly allowances incurred the wrath of the instructors.

Names of those being accused are being witheld.
According to the spokesman, some of the senior instructors directed their subordinates to collect the money every month.

“We have no option but to pay the money to them because any one who hesitates in paying the money is severely doubled up. We have been paying the GH¢10 since we started receiving our allowances in January this year,” he said.

When graphic.com.gh contacted the three officers, in the presence of their superiors, a female recruit (name withheld) who was invited to comment on the allegation confirmed that each of the recruits paid GH¢10 every month.

However, she said the money was always collected by the recruits themselves to cater for their welfare and other necessities “but not given to the drill officer, as is being alleged”.

She said she could not give off hand the total amount of money the recruits had in their coffers regarding the contributions they had so far made and the expenditure so far made.

When contacted, one of the senior instructors vehemently denied the allegation, saying, “I was out of the country on a peacekeeping operation and only returned in November last year and I, therefore, could not have directed anyone to extort money from the recruits, as is being alleged.”

When he was reminded that the alleged extortion started from January 2012 when he assumed duty as an instructor at the Police Training School, he said the allegation was out of malice and hatred.

“I have no hand in the equation about any extortion of money from recruits at the depot,” he said.

The two other police officers also vehemently denied the allegation, claiming that they had never extorted any money from the recruits.

When asked why, out of the 12 drill officers at the depot they should be singled out as those who had been extorting money from the recruits, the two said they could not answer that question.