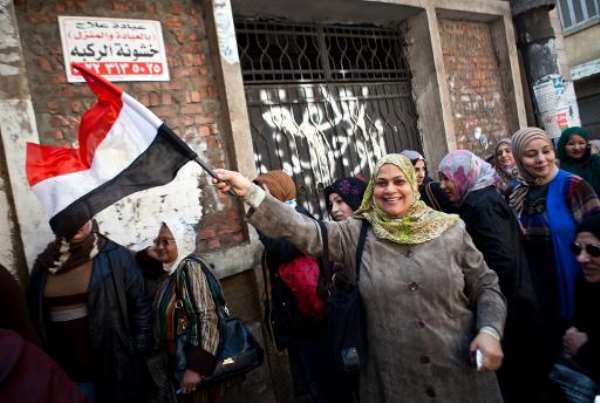 Cairo (AFP) - Egyptians queued to vote on a new constitution Tuesday amid high security, in a referendum likely to launch a presidential bid by the army chief who overthrew Islamist president Mohamed Morsi.

An Islamist coalition led by the former president's Muslim Brotherhood had called for a boycott and protests during the two days of polling.

A small bomb exploded outside a Cairo court shortly before polls opened in the morning, even as hundreds of thousands of soldiers and police deployed to guard polling stations.

The blast caused no injuries, but a hospital official said one man was killed in clashes between the Islamists and civilian opponents in the central province of Beni Sweif, while police dispersed small pro-Morsi rallies elsewhere in the country.

The incidents again highlighted the government's precarious grip on the most populous Arab country, still reeling from the ouster of Morsi and a bloody crackdown on his Islamist supporters.

The interior ministry has pledged to confront attempts to disrupt voting.

Defence minister Abdel Fattah al-Sisi, the general who overthrew Morsi in July, visited a polling station at a north Cairo school after voting began to survey the security preparations.

"Work hard. We need the referendum to be completely secured," he told soldiers guarding the school.

The government hopes a large turnout in favour of the constitution will bolster its disputed authority, while Sisi will monitor it for an "indicator" of his popularity, an official close to the general said.

"The people must prove to dark terrorism that they fear nothing," he said after casting his ballot.

"The voting is not only for the constitution, but also for the road map, so the country can have an elected president and a parliament."

The referendum will be followed by parliamentary and presidential elections.

The police and army have deployed hundreds of thousands of personnel to guard polling stations amid fears that a spate of militant attacks and protests would keep voters at home.

At one polling station for women at a school, dozens lined up to cast their ballots, some waving Egyptian flags and chanting pro-military slogans.

"We must be with our police and army so that no one can terrorise us. Even if a bomb exploded in my polling station, I would vote," said Salwa Abdel Fattah, a 50-year-old gynaecologist.

While it is uncertain how many Egyptians will vote amid concern over violence, the constitution appears certain to pass.

The charter has done away with much of the Islamist-inspird wording of Morsi's constitution, suspended on his overthrow, and its supporters say it expands women's rights and freedom of speech.

But it has bolstered the military's powers, granting the army the right to appoint the defence minister for the next eight years and to try civilians for attacks on the armed forces.

The runup to the vote was marred by a deadly crackdown on Morsi's supporters and arrests of activists who campaigned for a "no" vote.

The capital has been festooned with banners urging Egyptians to vote "yes", often featuring military motifs such as a general's hat, an allusion to Sisi, who is also army chief.

Many Islamists revile Sisi as the man who overthrew the country's first freely elected and civilian president, but the general is adored by the millions who took to the streets in July to demand Morsi's resignation.

He is widely expected to run for president, and has said he would stand for election if he felt there was "popular demand," state media reported this week.

The authorities are worried that a low turnout would empower their Islamist opponents in Morsi's Brotherhood and cast further doubt on their legitimacy, analysts say.

"Prove to the world that what happened was a popular revolution," interior minister Mohamed Ibrahim in a visit to a polling station, referring to Morsi's overthrow.

At least 1,000 people, mostly Islamists, have been killed in street clashes, and thousands have been imprisoned since the ouster of Morsi, whose supporters continue protests almost every day.