Mali leader heads to Paris for tests after assault 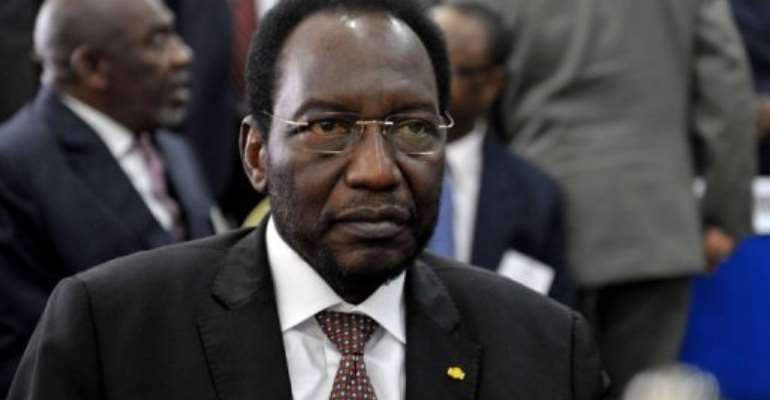 Dioncounda Traore has left for France to undergo medical tests after an assault by protesters. By Seyllou (AFP/File)

BAMAKO (AFP) - Mali's interim leader Dioncounda Traore left for France to undergo medical tests after an assault by protesters angry at his appointment to head a post-coup transition government.

"He is going to Paris for more thorough medical tests after being assaulted," a presidential official said on condition of anonymity, on Wednesday.

However government spokesman Hamadoun Toure, who is also communications minister, said Traore's medical appointment had been "made for a long time".

"He will come back as soon as his doctor sees fit," he added.

Traore aide Boubacar Diarra said there would be "no power vacuum" as his "check-up was scheduled".

The 70-year-old slowly climbed the stairs to the aircraft before his departure, AFP witnessed, two days after angry protesters evaded security and burst into his office, beating him badly enough to require a visit to hospital for a head wound.

Monday's protest was organised by the Committee of Malian Patriotic Organisations (COPAM), the pro-putsch coalition that held a two-day meeting ending with a resolution late Tuesday night that coup leader Captain Amadou Sanogo would head the interim government.

Defying the Economic Community of West African States-mediated deal, the coalition sparked fresh political upset with its decision "to institute Captain Amadou Sanogo as president of the transition" on Thursday.

Traore's party brushed off the statement as "simply a joke".

"The ridiculous isn't fatal. The organisers of this meeting are making a last-ditch stand, but it is irresponsible in the current situation," said Abdoulaye Kante of the Malian Democratic Alliance (ADEMA).

"There is a transition president, it is Dioncounda Traore."

Sanogo has not publicly reacted to the pro-putschists' decision to name him transition president.

Monday's attack drew widespread condemnation and concern for a fragile transition process after a March coup. Stability is urgently needed in Bamako to deal with Islamist and Tuareg rebels controlling the country's north.

The attack came just hours after regional mediators left the country pleased at having convinced coup leaders to accept a Traore-led 12-month transition back to democratic rule after weeks of political deadlock.

Sanogo had wanted Traore to step down after a constitutionally-mandated 40-day interim presidency, and many felt he was jockeying to lead the transition himself.

However on Sunday he accepted a sweetened deal as he was offered all the benefits a former president would get, including housing, transport, security and an allowance.

But an angry crowd, which was in favour of the ouster of President Amadou Toumani Toure and does not want Traore leading the transition, besieged his offices despite the presence of hundreds of security guards.

Sanogo and a group of low-ranking officers ousted the government on March 22, saying it was incompetent in handling a rebellion by armed Tuaregs in the north which broke out in January.

However the coup only opened the way for the Tuaregs, armed Islamist group Ansar Dine, backed by Al-Qaeda in the Islamic Maghreb, and criminal groups to occupy the vast north of the country, an area larger than France.

In the fabled city of Timbuktu, witnesses reported that Ansar Dine and AQIM had on Wednesday destroyed a monument dedicated to those who died in the struggle against dictator Moussa Traore in 1991.

They also whipped youths who were seen smoking as they strengthen their hold in the region where they have implemented strict Islamic law.

"They first tried to break the monument with tools, but it didn't work," said a teacher in Timbuktu via telephone. "Then they attached a rope to the monument, tying it to a vehicle and driving off, causing it to fall."

The Islamists have already destroyed the El Farouk monument, a horse and symbol of the ancient city seized with the region's other main towns Gao and Kidal in the days following the March coup in Bamako.

They also desecrated a holy tomb at a UNESCO World Heritage site, raising concern for the rich cultural history of Timbuktu.