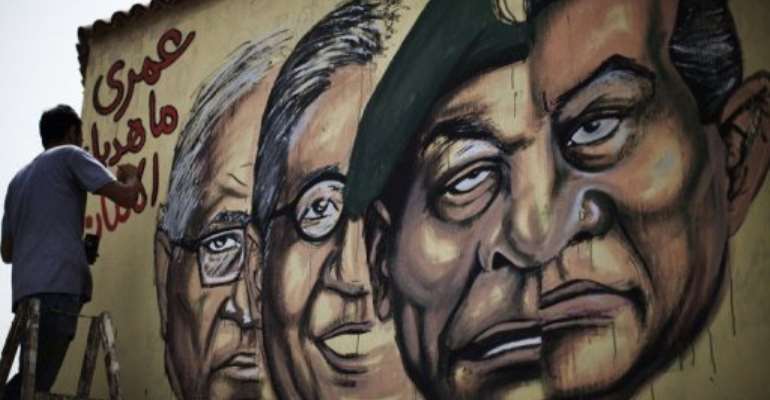 The election caps a rollercoaster transition, marked by political upheaval and bloodshed. By Marco Longari (AFP)

CAIRO (AFP) - Egyptians take to the polls on Wednesday in a historic presidential election contested by Islamists and secularists promising radically different futures for the country.

The election is the final phase of a tumultuous transition overseen by the ruling military council after a popular uprising ousted longtime president Hosni Mubarak last year.

After decades of pre-determined results, for the first time, the outcome of the vote in the Arab world's most populous nation -- which also pits revolutionaries against old regime members -- is wide open.

The next president will inherit a struggling economy, deteriorating security and the challenge of uniting a nation divided by the uprising and its sometimes deadly aftermath, but his powers are yet to be defined by a new constitution.

Among the contenders is former foreign minister and Arab League chief Amr Mussa, who is seen as an experienced politician and diplomat but like Ahmed Shafiq, Mubarak's last prime minister, is accused of belonging to the old regime.

The powerful Muslim Brotherhood's candidate Mohammed Mursi faces competition from Abdel Moneim Abul Fotouh, a former member of the Islamist movement who portrays himself as a consensus choice with a wide range of support.

On Tuesday, ballot boxes were being distributed to the 13,000 polling stations around the country, which will open at 8:00 am (0600 GMT). Voting will take place over two days.

Candidates have been campaigning across the country for weeks in an unprecedented democratic exercise made possible by the early 2011 revolt.

A ban on campaign-related activities, laid down by the Supreme Presidential Election Commission for 48 hours before the vote, did little to dim excitement in the capital, as an army vehicle rumbled through Tahrir Square -- the epicentre of protests that toppled Mubarak -- urging Egyptians to vote.

"Rise, Egyptian; Egypt is calling you," the soldier shouted through a loudspeaker, borrowing the lyrics from a popular nationalist song by iconic composer Sayyed Darwish.

The ruling Supreme Council of the Armed Forces (SCAF), in power since Mubarak's ouster, repeated its earlier calls for Egyptians to turn out en masse to the polls, while warning against any "violation."

"The participation of citizens in the presidential election is the best guarantee of the transparency and security of the electoral process," Mohammed al-Assar, a member of the SCAF, was quoted as saying by state news agency MENA.

"We will not allow any violation or (attempt) to influence the electoral process or the voters," he added, saying that any person who broke the law would be treated "firmly and decisively."

The SCAF has vowed to hand power to civilian rule by the end of June, after a president is elected, but many fear its retreat will be just an illusion.

Mubarak, 84 and ailing, may watch the election from a military hospital on the outskirts of Cairo as he awaits the verdict of his murder trial on June 2.

The former strongman is accused of involvement in the killing of some 850 protesters during the uprising and of corruption.

According to pollsters, the large number of voters undecided between candidates reflecting radically different trends and the novelty of a free presidential vote make Wednesday's election almost impossible to call.

Police requests CCTV footage of murder of wife of GNPC boss'...
3 minutes ago

Some immigration officials are aiding foreigners to stay ill...
3 minutes ago