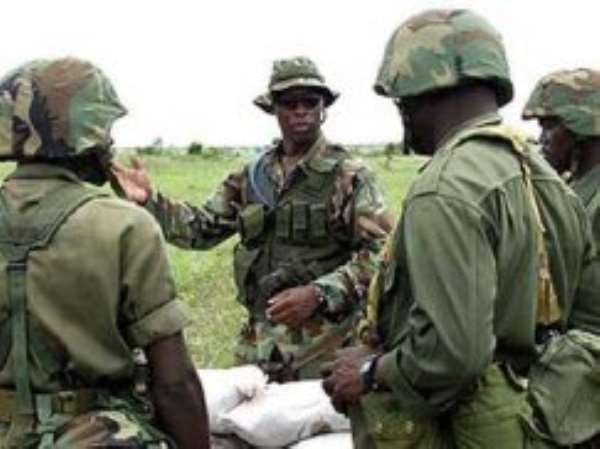 The Sunyani High Court has issued a bench warrant for the arrest of two soldiers and an Immigration officer for failing to appear before it to answer charges of conspiracy and robbery against them.

They have also been charged with kidnapping and dishonestly receiving.

The court, presided over by Mr Justice Quartey Ofosu-Kwate, however, remanded Kwasi Asante, a cocoa purchasing clerk stationed at Nkrankwanta, in prison custody.

Two persons jointly charged with the soldiers and the Immigration officer, Hayford Sakyi Bediako, the District Officer of the Produce Buying Company (PBC), stationed at Nkrankwanta, and David Asante Gyamfi, an accountant of the PBC, also at Nkrankwanta, were granted bail in the sum of GH¢100,000 each, with three sureties to be justified.

They had earlier pleaded not guilty to the charges and will reappear before the court on May 21, 2012.

A Principal State Attorney, Mrs Afia Serwaa Asare-Botwe, who prosecuted, told the court that the complainant in the case, Mr Mahama Issah, is a farmer at Ameyawkrom, near Nkrankwanta, while Gyamfi is a commission marketing clerk with the PBC at Krakrom, near Nkrankwanta.

He said Gyamfi and the complainant were cocoa transacting business associates and that in February 2011, Gyamfi allegedly advanced to Mr Issah an amount of GH¢37,200 to purchase 186 bags of cocoa beans for him.

She said after the complainant had collected the money, he delayed in the supply of the cocoa beans.

Mrs Asare-Botwe said on April 15, 2011, however, the complainant arranged 300 bags of cocoa beans from Dame in Cote d’Ivoire and conveyed them to Kwabenakrom and informed Gyamfi to come over to inspect them.

She said upon receipt of the information, Gyamfi proceeded to Kwabenakrom and, after inspecting the cocoa, expressed interest in it but told the complainant that he did not have enough money on him to pay for all the 300 bags and, therefore, wanted to return to Nkrankwanta to organise for more funds.

According to the Principal State Attorney, the complainant obliged and Gyamfi left.

She said surprisingly, Gyamfi returned to Kwabenakrom in the company of the three security officers who were armed and arrested Mr Issah, after he had been identified to them by Gyamfi as the owner of the cocoa beans.

She said the cocoa was then loaded into three KIA trucks and sent to Nkrankwanta.

Mr Issah was said to have been detained in a wooden structure at the Customs checkpoint at Nkrankwanta until his brother, one Mr Abubakari Issah, was asked to pay GH¢8,000 to Gyamfi before Issah was released, the court heard.

The prosecutor said the matter was then reported to the Prefect of Dame, who also made another report to the Municipal Chief Executive for Dormaa, after which the latter set up a committee to look into the matter. But the accused persons did not co-operate with the members.

Subsequently, the case was reported to the police and, after their investigations, the docket was sent to the Attorney-General’s Office in Sunyani, from where the police were directed to prefer charges against the accused persons.

We stand with Ayine against judicial tyranny, plans to gang ...
31 minutes ago