In Kenya, a community radio brings succour to dwellers 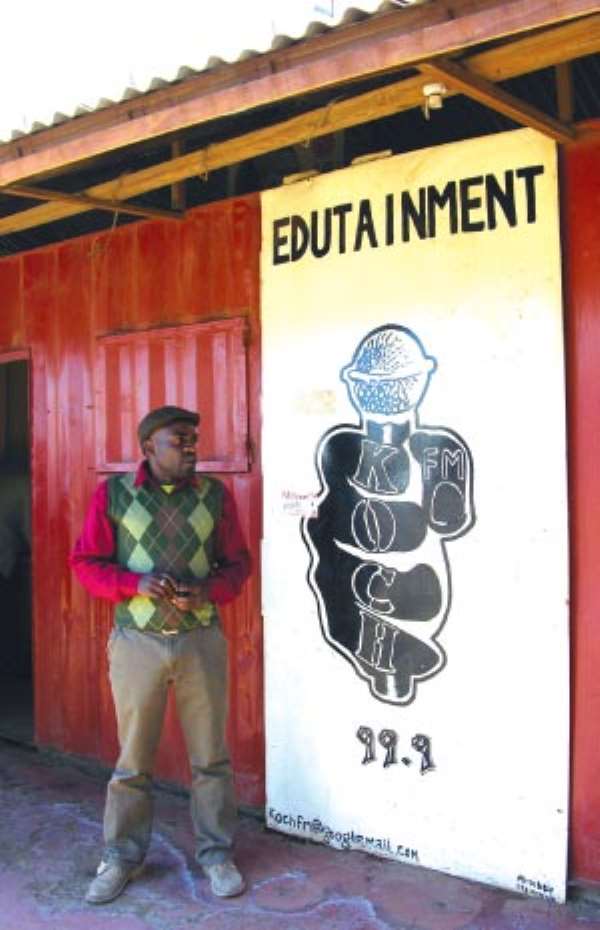 Korogocho, a slum in northeastern Nairobi with 100,000 inhabitants, had many of the ingredients for a political explosion similar to those that rocked other parts of Kenya in early 2008. It is crowded and very poor and has a reputation for brutal crime. But when a contested election brought violent protests to Mathare and other nearby slums, with hundreds killed and many more displaced, Korogocho remained quiet.

Much of the credit rests with the activists who operate Koch FM, Kenya's first licensed community radio station. As political tensions mounted nationally when the opposition challenged the initial results of the election, “people expected Korogocho would explode,” recalls Tom Mboya, the Koch FM team leader. But station activists quickly went out to church leaders and other influential figures to record appeals for calm. The recordings were broadcast repeatedly. “Those messages worked,” says Mr. Mboya. “That really convinced people, and calmed down everything.”

Beyond that, adds Leonard Njeru, another member of the station staff, Korogocho residents responded to radio appeals by donating food, clothing and other goods to help victims of the violence elsewhere. Much of what was collected in Korogocho was delivered to displaced people who had found refuge in a church in Mathare North.

This experience was a very good case of community-based “conflict prevention,” agreed a group of experts on conflict and security who visited Korogocho following a meeting organized by the UN's Office of the Special Adviser on Africa.

In setting up Koch FM (Koch is short for Korogocho), Mr. Mboya and his colleagues were motivated by a desire to enhance the community's image. People from the area often found themselves “stigmatized,” Mr. Mboya explains. The Korogocho Primary School even changed its name so that graduates would not so easily be identified as coming from the area.

At first community activists considered producing a documentary film to portray the positive sides of life in Korogocho. But they lacked the funds, and someone proposed another idea: setting up a radio station. “It was simple,” Mr. Mboya observes. “You just need a computer, a microphone, a mixer and a transmitter.”

But even this simple idea required jumping hurdles. Kenya's broadcasting regulations at the time covered only public and commercial stations, and licences were very expensive. So supporters mounted a public campaign, and received some positive coverage from other Kenyan media, as well as from the BBC and Radio Netherlands. Eventually the Communications Commission of Kenya granted a license in December 2006, the first for any community station in the country. Several others, inspired by Koch FM, have since secured licences as well.

A non-governmental organization, Norwegian Church Aid, donated enough money for an old shipping container to house the studio and other facilities. A contribution from the Open Society Initiative made it possible to upgrade the structure and replace an old makeshift transmitter with a more professional one.

For programming ideas the staff went directly to the community. There are now programmes on women and children, youth, health, the environment, HIV/AIDS, political governance and other issues, as well as music by local performers. The guiding principle is “edutainment” — education through entertainment. The station broadcasts around the clock, with presenters operating the studio from 6 am to midnight and recorded music being broadcast automatically during the night.

The interaction between the station and residents has helped change political dynamics in the community. Previously, each of Korogocho's nine villages still had an office of the youth wing of the former ruling party, at which residents were often brutalized. In alliance with several community groups, Koch FM mounted a public campaign that closed them down.

Residents had also been subjected to a variety of illegal levies. Those who wanted to improve their shacks, such as by putting up a new sheet of iron roofing, had to pay the chief a “repair fee.” Koch FM invited onto the air lawyers from Kituo cha Sheria, a non-governmental legal aid society. They explained that such fees had no legal foundation. Once residents became aware of this, they refused to pay. Both levies were soon cancelled.

Educational programmes on the radio, targeted to young women and men alike, are intended to raise awareness of women's rights. Reports of rape have declined as a result. Benefit dinners and other fundraising activities sponsored by the station have raised money to send young women to secondary school.

The station helps organize periodic public forums. These are usually held in the community hall or in the square in front of it and take up pressing issues. One prevalent concern is the use of money allocated by the government to Korogocho through a decentralized Constituency Development Fund (CDF). Since members of parliament are responsible for overseeing the CDF, the local MP who was asked to come to Korogocho to explain how the money was used lost his seat after he declined the invitation.

His successor did come to hear Korogocho residents' complaints. But little has happened since then, and people are skeptical that their request to be allowed to elect representatives to the CDF board will be accepted.

The adoption of a new Kenyan constitution in 2010 expanded human and democratic rights in various areas of life. Unfortunately, many Kenyans are still not fully aware of those rights. Koch FM brought on the chief justice of the Supreme Court, lawyers from Kituo cha Sheria and others to help explain the constitutional safeguards.

With a new round of elections coming up (probably in early 2013), activists are worried about the possibility of political violence. “How do we sustain the peace during that forthcoming election?” asks Mr. Mboya. Koch FM's answer is to organize more public forums, so that residents can openly air whatever animosities or misunderstandings they may have. “After they speak out,” says Mr. Mboya, “you see there is a sense of relief.”