AFTER ATTACKING JJ RAWLINGS, HOW MANY VOTES WILL YOU BRING TO THE NDC THIS DECEMBER? 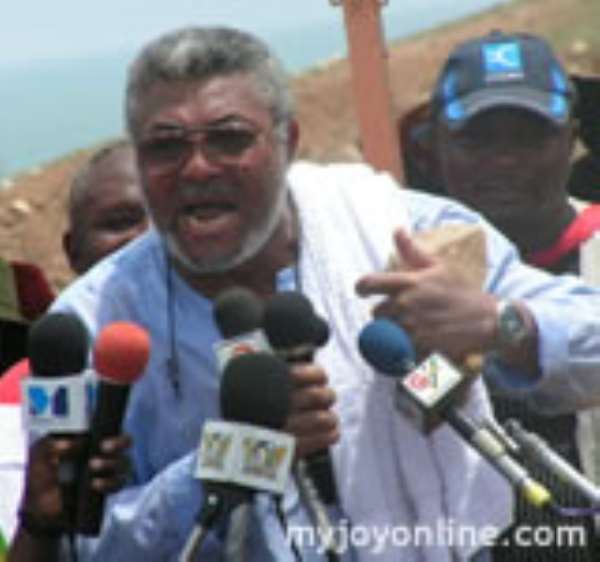 Intelligence the Daily Post has gathered indicates that consultants Nana Akufo Addo has hired to advice him on how to win the Presidential elections this December have told him that it is a done deal for him if President Mills and the NDC fail to bring former President Rawlings on board to join the campaign trail.

Those who want to rubbish this intelligence by the Daily Post can go ahead and do so. But, our track record at intelligence gathering so far has proven that we are always spot on.

Just to refresh the minds of the doubting Thomases, in the run-up to the December 7, 2008 elections, we were the only newspaper to publish, based on intelligence gathered, that the Ghana-Togo border will be closed 72 hours before election day by the NPP government ostensibly to prevent Ewes in the Volta Region who would travel to Togo to trade from coming back to vote. The government of the day rubbished our claim. Yet, 72 hours before the December 7 voting, they closed the Ghana-Togo border.

In 2010, we published that personnel of the Ghana Prison Service was going to embark on a strike. The authorities disputed our claim, insisting that any such occurrence would amount to mutiny. Lo and behold, it came to pass: prison officers in the country went on strike less than a month after our publication.

We humbly boast of a long list of stories published based on intelligence we picked up and to the glory of God, all we published came to pass. It is in light of this that we caution those who it may concern to take seriously intelligence we have gathered that Akufo Addo's consultants, based on work they have done the past few months, have told him that his chances in this December's election will be bright if Rawlings does not join the NDC campaign team. This should make every true NDC member sit up and watch his or her words and actions especially in light of Mrs. Rawlings' seeming attempts to put spokes in the wheels of the NDC campaign machinery.

The Daily Post is unhappy with the way Mrs. Rawlings has handled some of her activities in relationship to the NDC since the Sunyani congress. As a matter of fact, some things that happened at the congress have left a sour taste in the mouths of many NDC supporters. The likes of Mr. Kofi Totobi Quakyi should be commended for reducing the tension on that D-day; we were aware that the sitting arrangement had earlier been done by some faceless people in such a way as to humiliate the Rawlingses. But, he got it reversed just in the nick of time when he saw what had been done.

But, a true democrat is the one who is able to live above her pain after an electoral defeat, especially when she believes that she was given a raw deal. Often, in life, time itself gives us revenge on a silver platter. And, how sweet it is; after all, revenge is a tasty food when it is cold. That is why the Daily Post is unenthused about Mrs. Rawlings' seeming attempt to get her pound of flesh at all cost even at the detriment of the party.

Be that as it may, it is important for NDC activists to be circumspect about the way they take on Mrs. Rawlings. Often, many are unable to differentiate between Rawlings and his wife and are quick to visit the 'sins' of the matriarch on her husband.

Why attack Rawlings for his wife's actions and inactions? No wise person in the NDC should be doing that especially when it is a fact that it is Rawlings who brings in votes for the NDC. Anyone who wants to rubbish this must either be living in kuku's land or has never been on the campaign trail before, especially in the hinterlands.

Now, in the wake of the salvos that Mrs. Rawlings has wrongfully be throwing at President Mills and the NDC, it is not uncommon these days to hear on radio some NDC activists attacking even Former President Rawlings. The irony here is that these people who attack Rawlings and try unconvincingly to convince NDC faithfuls that he, Rawlings, can go to hell are people who cannot even win at the primaries of the party or win even a constituency election. Some cannot even convince their spouses to vote for the NDC. Yet, they make the loudest noise and pontificate on the airwaves trying to convince us that Rawlings cannot help Mills win the election. The sad aspect of it all is that some at the hierarchy of the government and the party believe such fallacy.

Every election is a game of numbers. An election is not a debate where the winner is determined by the sound arguments he makes. It is not a quiz competition where the most intelligence person wins. It is not a beauty contest where the contestants face, vital statistics, poise and confidence determines who wins. It is a game of numbers. The one with the highest numbers, even if he is the ugliest, the dumbest, the poorest or the laziest, is the winner. Period!

NDC supporters should ask those who attack Rawlings on political programmes how many votes they will bring to Prof. Mills in the December elections. Some of the people attacking Rawlings cannot win elections even in their own homes.

The NPP, aware of the damage Rawlings will do to them if he joins the NDCl campaign have decided to rather be rallying to his defence anytime misguided NDC apparatchiks attack him. They are using the “my enemy's enemy is my friend” approach to ensure that Rawlings does not join the NDC campaign team nor attack them. The Osono are definitely smart. The NDC must be smarter.

So, must the Mills government and the NDC look on while Mrs. Rawlings makes unfortunate pronouncements against them. Definitely not! Of course, sometimes, silence is golden. At other times, she must be taken on. But, it is important that in doing so, all must watch their language.

Yes, the single most important person for the NDC as far as the December elections is concerned is President Mills. It is his face that will be on the ballot box. But, he alone, against an NPP campaign team that is good at making people see lies as truth cannot win the election. President Mills needs Rawlings to win and win well.

The argument that Rawlings cannot campaign for Mills after criticizing him all these years is mundane. The former President has so much to say in support of President Mills unless we are to believe that a person who criticizes a Presidential candidate for good reasons, is his enemy.

President Mills and Rawlings have their differences. Who says they do not have areas of co-operation? So, for those who desperately want President Mills to win the December elections, yes, there are differences between him and Rawlings but let us focus much on what unite them. To achieve victory, we must learn to accentuate the positives more than the negatives.