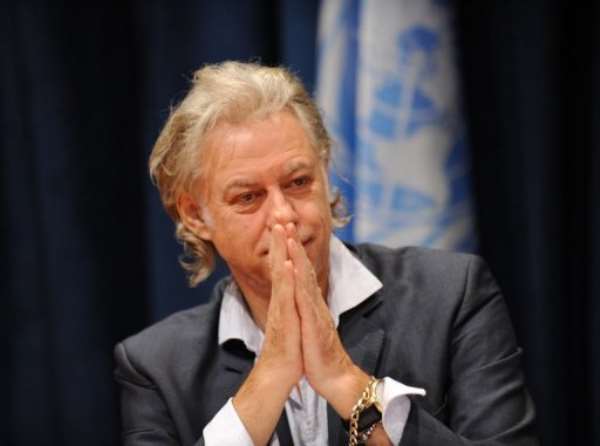 "If they keep saying 'you can't write anything critical,' they're in trouble," Geldof told AFP. "Have them participate, allow the pressure valve to come off," he added.

He said Ethiopia must follow the example of Western nations, which developed only with greater freedom of expression. Unless Ethiopia becomes more tolerant, he cautioned, it could reverse recent economic and social progress.

"It will stumble if they don't bring their people into the argument," he warned, adding that Meles is a "very intelligent leader who truly understands government."

Rights groups have criticized Ethiopia for using its anti-terror legislation to stifle peaceful dissent and restrict freedom of the press. Close to 200 people were arrested under the law in 2011.

Geldof said Ethiopia's system of federalism had bred dissent throughout the country, but warned that opposition activity could become a political threat if they are not offered a voice in national politics.

"You cannot stifle people's voices. If it became more inclusive, if argument was allowed if the country -- if civil society is allowed to breathe -- then you would see a reduction in all this independence activity," he said.

"One way or another, civil society will win. They will win, there's more of them, and people will breathe."

Geldof led a campaign to raise $1 million for Ethiopian famine victims in the 1980s. He was in the Ethiopian capital for the World Economic Forum, which closes Friday.

Alongside fellow pop star Bono, he has advocated for greater aid from the West to help lift African countries out of poverty.

There are currently 24 people, including prominent journalist Eskider Nega and opposition member Andualem Arage, on trial for "terrorism" in Ethiopia.

In December, two Swedish journalists accused of terrorism were sentenced to 11 years in prison.