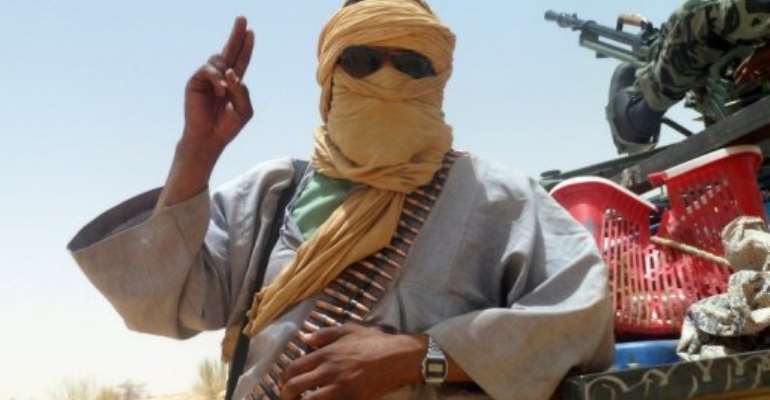 BAMAKO (AFP) - An Islamist rebel who controls parts of northern Mali is negotiating with an Al-Qaeda splinter group for the release of seven Algerian diplomats being held hostage, both parties said Friday.

Moustapha Ould Tahel of the Movement for Oneness and Jihad in West Africa (MUJAO), which kidnapped the Algerians, said they had met with the leader of Ansar Dine, Iyad Ag Ghaly, to discuss the release.

Ansar Dine's envoys "asked us how we can free them (the hostages). We will keep talking," Tahel said.

MUJAO, an offshoot of Al-Qaeda in the Islamic Maghreb (AQIM), abducted the Algerian consul and six members of his team from Gao in northeastern Mali, on April 5.

The abduction took place as Islamist and Tuareg separatist groups overran the north of the country in the wake of a military coup in the capital Bamako, seizing control of a region larger than France.

On Tuesday, MUJAO warned Algiers that if it fails to meet its demands within 30 days, the hostages' lives will be in danger. The group previously demanded the release of Islamist militants and a ransom of 15 million euros ($19.5 million).

"The Algerian government knows our demands ... There is still time for talks. Afterwards, it will be late," read a statement.

As the country's south remains frozen in political deadlock, Ag Ghaly has continued to implement Islamic law in various towns in the north and is now in the city of Gao "consolidating Ansar Dine's base", said an ally, Oumar Ag Ahmed.

A group of low-ranking officers ousted President Toumani Toure on March 22, citing his government's incompetence in dealing with a Tuareg rebellion in the north which was overpowering the army.

However the overthrow left a political vacuum allowing several rebel groups to move in alongside the Tuareg and stake their claim to the vast desert zone.