Mali in limbo as ex-junta refuses return to barracks 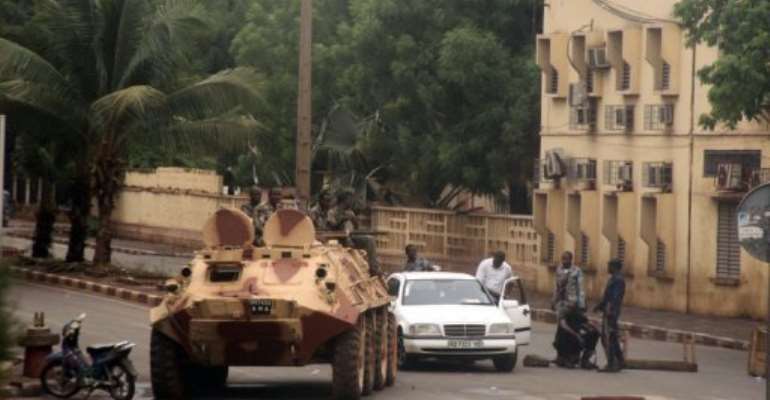 There is no agreement on who will run Mali after May 22. By Habibou Kouyate (AFP)

BAMAKO (AFP) - A month after handing power to civilians, Mali's ex-junta is resisting a return to barracks, threatening to disrupt a transition to democratic rule in Bamako while Islamists retain a firm hold on the north.

The group of low-ranking soldiers led by Captain Amadou Sanogo, which ousted President Amadou Toumani Toure's government on March 22, last month agreed to the formation of an interim government headed by Dioncounda Traore.

According to the constitution this should last for 40 days, and while the Economic Community of West African States (ECOWAS) and ex-junta agreed this was too soon to organise elections, there has been no agreement on who will run the transition after the mandate runs out on May 22.

Laborious talks have taken place between the regional mediators and the soldiers and a new team arrived in Bamako on Tuesday to try and thrash out a solution.

"We can't say things are advancing," said Ivorian Minister of African Integration Adama Bictogo, who is part of the team along with Burkina Faso's Foreign Minister Djibril Bassole.

The main sticking point according to those close to talks is who will lead the transition, which ECOWAS had wanted to last 12 months.

Bamako's political class, along with the 15-nation bloc, want 70-year-old mathematician Traore to continue as interim president, the putschists don't.

"After the 40 days, everything must go back to zero and we must agree on who will lead the transition," said a close ally of Sanogo.

The two ECOWAS envoys "have twice met the soldiers but for now, there is no result. We have the impression that some are waiting for the 40 days to be up to take charge," a source close to the mediation team said on condition of anonymity.

An African diplomat based in Bamako said the best scenario would be finding a civilian president who could take over on May 22. "The international community and sub-region, don't want the soldiers to lead the transition."

But observers believe this is exactly what the ex-junta wants.

"It is the junta who is really in charge in Bamako," writes Malian journalist Tiegoum Boubeye Maiga, noting that the ongoing chaos in the south was doing nothing to resolve the troubles in the north, which was overtaken by rebel groups in the wake of the coup.

"The latest attempt at a counter-coup presents security problems in Bamako," Maiga added, referring to clashes between paratroopers loyal to the ousted Toure and the ex-junta soldiers.

The heaviest and most pressing task facing a transition government, is finding a way to win back the north, an area larger than France, which is being held by various groups, mainly Tuareg nomads and armed Islamists supported by Al-Qaeda in the Islamic Maghreb (AQIM).

"The north is our main concern ... the population there and here should know that," interim leader Traore said on Wednesday.

This statement was far from that made when he was sworn in on April 12, promising "complete and unrelenting war" against the armed groups.