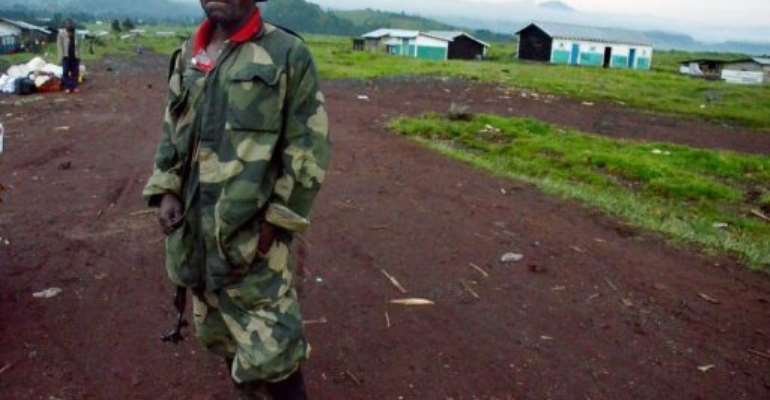 A Congolese army (FARDC) soldier stands on May 8, outside the deserted town of Kibumba. By Junior D.Kannah (AFP/File)

KINSHASA (AFP) - Hundreds of mutineers in eastern Democratic Republic of Congo have come back to the army as a deadline loomed for the ex-rebel deserters to return to its ranks, a military spokesman said Thursday.

On Saturday the Congolese army (FARDC) had given the mutineers five days to return to their units in the restive Nord Kivu province.

The deserters were ex-fighters in the rebellion led by renegade general Bosco Ntaganda, who has been indicted for war crimes.

"We have welcomed a tremendous number, hundreds, of soldiers. And they continue to return because they know that at the place where they were led, there is no way out, there is no future," colonel Sylvain Ekenge, a military spokesman in the eastern provinces told AFP.

"We will see how we will catch the small group which remains with general Bosco (Ntaganda), holed up in the (Virunga) park" on the border with Rwanda, he said, adding that the continuing operations were secret.

As for the mutineers, he said "there is no problem of reintegration" in the army, and that the military chose clemency because the soldiers had been "led away by force" or "tricked" by Ntaganda.

Hunger was another reason many of them returned to the army, he added, explaining that the mutineers hiding out in the park for seven or eight days had trouble resisting because of lack of food.

Ntaganda, nicknamed the "Terminator", is wanted by the International Criminal Court for alleged war crimes including recruiting child soldiers when he was part of a militia in the early part of the last decade.

The mutineers are former members of rebel group the National Congress for the Defence of the People (CNDP) who had been integrated into the army of the vast central African country under a 2009 peace deal.