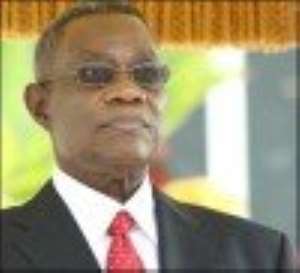 2001 Ghana, a new day had dawned. 19 years of the bloodiest chapter in the country's history had finally come to an end. A new administration from a different tradition had been voted into power. The gait of the incoming president was full of confidence.

But within a few days of taking over, president Kufuor got the shock of his life. The country was completely broke. The previous government, using the “media blackout” tactic – perfected over a 19 year period- had been able to hide that fact from the country.

However that was not even the worst of the news. In a meeting with the IMF six months after assuming office, the new president was informed that the previous government, the P-ndc, had cooked the books. Evidently, the economic team under the guardianship of the then vice president and current president John Mills had been turning 3 into 8 and 1 into 7.

As consequence, Kufuor's administration was asked to retroactively bear the responsibility. The country was fined $39 million. This meant that of the $66 million Kufuor had managed to secure on that particular trip, more than half had to be used to pay the fine.

According to the Agence France-Presse (AFP), other African, Caribbean and Pacific nations had pleaded on behalf of Ghana but to no avail. Within a year or so, Ghana would file for “bankruptcy” aka HIPC.

Now let us fast forward to the year 2011. As part of an agreement with donor nations, foreign observers were tasked to periodically audit the Ghana Statistical Service (GSS). The results were not any different from the IMF audit in 2000. The numbers just didn't add up. As amends, the GSS boss, Grace Bediako was scape goated by the Mills government.

Thus it was with caution that Dr. Bawumia, in his “state of the economy” speech a few days ago, advised that maybe it was about time the GSS became an independent body. For in spite of the current “impressive” economic numbers being touted by Mills, things on the ground seem to tell a different story.

The Cedi continues to depreciate hitting a 19 year low not long ago. In fact the Cedi has been adjudged one of the worst performing currencies in the world.

For the first time, an organization called the “Association of Unemployed Graduates” has been formed; perhaps the first of its kind in the history of the world.

In the past three years, Mills has borrowed more money than all previous governments – since Nkrumah- combined. The country's debt stock has risen from about $6 billion in 2008 to almost $24 billion in 2012. Yet Ghanaians have not seen any significant improvements in their lives.

A country they say can only determine its true strength economically and politically based on accurate and updated population figures. But it has been two years since the census was conducted yet the GSS has so far failed to release the results. The GSS says the outfit would not be pressured to do its job even though we live in a democracy.

So something is definitely, seriously and ominously amiss. Thus like the IMF fine, it'd probably have to take a new administration for the country to know the true state of things. Luckily for us, we are in an election year so if voters do the right thing, the true state of things would come to light sooner than later. This scenario also applies to Woyome. We would never know how Woyome duped the nation out of $52 million until a new administration comes to office.

At the moment Ghana's debt stock has risen again with the approval of the $3 billion Chinese loans. And if this trend continues – without it being arrested by voting out Mills- Ghana would have no choice but to go HIPC again in 2016.