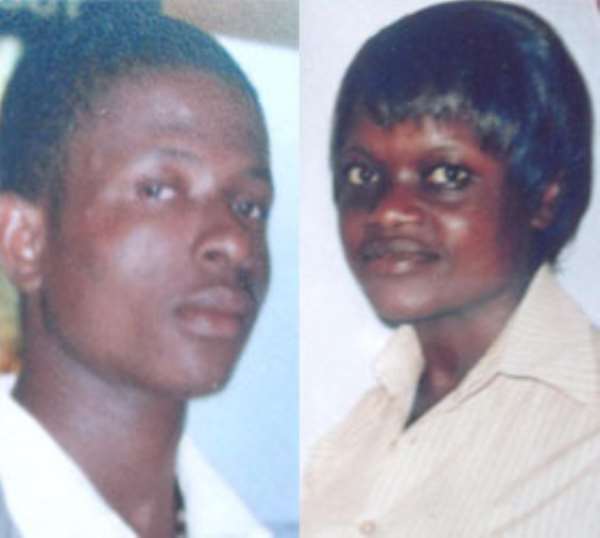 YAA OFORIWAA, 26, the pregnant woman at Sepe Timpom in Kumasi who on Wednesday morning was stabbed together with her two daughters by her husband, Kwadwo Yeboah aka Makafi, has died.

The Asawase District Police Commander, DSP Nana Kumi, who confirmed the sad news to DAILY GUIDE , indicated that Oforiwaa died around 5:00am on Friday whilst receiving treatment at the hospital.

News reaching DAILY GUIDE indicates that Oforiwaa, who sustained severe injuries after being stabbed in the stomach, initially responded positively to treatment and looked like she would recover fully.

But the mother of two, who was receiving treatment at the emergency centre of the Komfo Anokye Teaching Hospital (KATH) in Kumasi, had a relapse and died yesterday morning.

Oforiwaa and her two daughters, Abena Adwubi, 4, and one-and-a-half-year-old Francisca Ama Oforiwaa were stabbed with a sharp knife by Makafi, her husband.

The two children, whose stomachs were slashed open, died instantly in their mother's locked room as their wicked father watched.

Oforiwaa was rescued by the neighbours in the area after her mother, Madam Adwoa Manu, spotted her bleeding profusely in their room late in the night.

The mother of two, who lost the baby after the incident, initially looked like she was on her way to recovery but her situation suddenly deteriorated, resulting in her death.

Sources at the hospital noted that Oforiwaa, before passing away, managed to give them an account of what happened to her and her two daughters that fateful Wednesday morning.

The deceased reportedly narrated that Makafi was in good spirits when he visited her and the children that day, pointing out that she never anticipated that her husband could kill her and their children.

Oforiwaa, who reportedly confided in her brother while on her death bed, said her husband pretended that all was well with him and even had sex with her in the room.

Oforiwaa, however, flatly refused to do such a thing, thus infuriating Makafi, who tied her hands with a rope, covered her mouth and stabbed her in the abdomen.

The suspect then directed his anger at his children, Abena Adwubi and Ama Oforiwaa, slashing their stomachs open with the sharp knife, killing them instantly.

Makafi, after the heinous crime, tried taking his own life but failed as the metal bar he tried to hang himself on, with a sponge, broke.

The suspect, who is said to be a wee smoker and thief, has since the incident gone into hiding.

Reports from Sepe Timpom have it that Makafi is hiding at an unknown place in Kumasi.

Meanwhile, the Asawase police, according to the commander, DSP Nana Kumi, have intensified the search for Makafi, who is reported to be hiding in the thick bush behind the Kumasi airport.

The police capo on Friday morning told DAILY GUIDE on phone that his outfit received a tip-off that Makafi was hiding in a bush around the airport so 'I hurriedly dispatched police personnel to comb the area to see if we can apprehend him.'