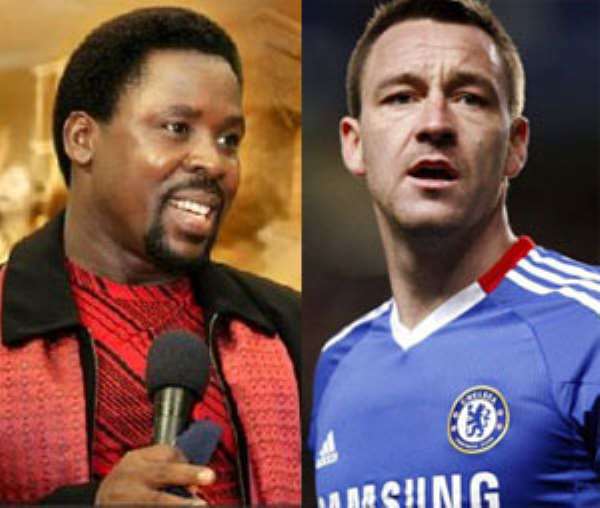 NEWS from Nigeria says the controversial Prophet T.B. Joshua, founder and leader of Synagogue of All Nations church, has prophesied that English giants Chelsea will lift this year's UEFA Champions league trophy if the team does not play the final match with its captain, John Terry.

Chelsea, on the 19 th of this month, will face Bayern Munich at the Allianz Arena in Munich, Germany, for the finals of the Champions League and the Nigerian Prophet, without predicting the score line, is reported to have predicted the match in favor of Chelsea.

According to the reports, the prophet was also into football administration and currently managed Lazio's young duo of Edmund Ogenyi Onazi and Sani Emmanuel.

News2onlinenigeria reported that TB Joshua prophesied after the sacking of Portuguese manager Andre Villas-Boas that Chelsea would play in the finals and if John Terry did not play the final, Chelsea would win the final game because there was bad luck hanging on the head of the skipper - which is presumably from his affair with the wife of Wayne Bridge.

T.B. Joshua is not new to such prophesies as he prophesied Nigeria's failure to qualify for the 2012 Gabon/Equatorial Guinea African Cup of Nations, Zambia's triumph in the 2012 AFCON, Asamoah Gyan's last minute penalty miss during the 2010 World Cup and a host of others.

Chelsea's run to the Champions league final has been a miracle, particularly in the semi finals against Barcelona, where the Catalans hit the post 6 times.

I don’t know him – Afoko denies knowledge of prosecution wit...
59 minutes ago