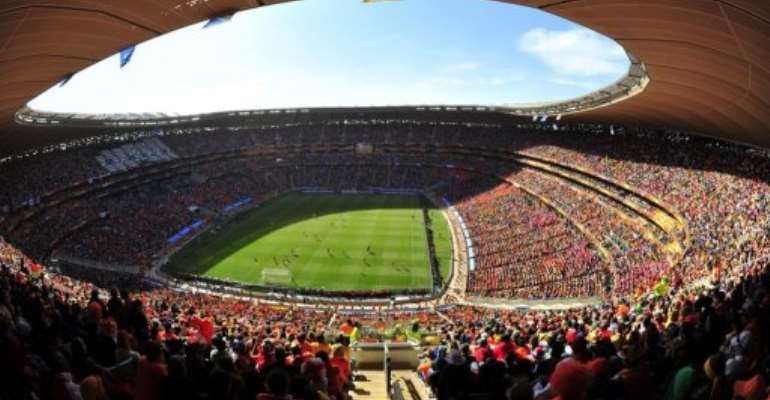 JOHANNESBURG (AFP) - The Africa Cup of Nations champions next year will be crowned in the same calabash-inspired Johannesburg stadium as the 2010 World Cup winners, sport minister Fikile Mbalula said Friday.

"We will host the opening and closing ceremonies in Johannesburg," said Mbalula, ending long speculation and dilly-dallying on the announcement of the five host cities.

Other hosts are Rustenburg, Nelspruit, Port Elizabeth and Durban, he said.

Noteably absent is Cape Town, whose landmark seafront stadium was built for the World Cup. The city, one of the few run by the political opposition, had reportedly balked at the costs associated with hosting the tournament.

But Mbalula said location was the deciding factor.

"Rather than using the whole of the republic we have reduced to a total number of about four, five stadiums so that they are close to each other."

The venue for the final was built for the World Cup two years ago with 94,700 seats, and is covered in clay-coloured panels inspired by the calabash gourd used widely as a pot across Africa.

Spain beat the Netherlands 1-0 in extra time to win the championships.

Mbalula declined to comment on the budget for the tournament but said South Africa's government, private companies and the Confederation of African Football would all contribute.

"On relieving the financial burden for host cities, there's a joint task team... which will meet with the host cities individually to allay fears," he said.

The 32-match tournament should be welcome business for the cities, where the state spent billions of rands to build new and upgrade old stadiums for a handful of 2010 games.

Some have failed to attract home sports teams and even pay for matches featuring top local sides, while activities like bungee-jumping, religious events and concerts with artists like Coldplay and U2 help foot some bills.