Gov't would not act on media accusations - JAK 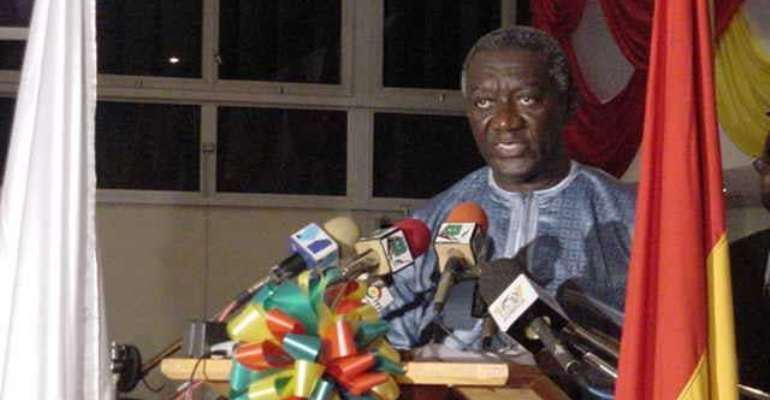 Kumasi, Aug 15, GNA - President John Agyekum Kufuor said on Friday that he would not act on mere media allegations of corruption against his government.

He said there are appropriate agencies responsible for this and other acts of malfeasance and challenged those who have credible evidence to report to those agencies for the law to take its course. Speaking during a courtesy call on the Asantehene, Otumfuo Osei Tutu 11, in Kumasi on Thursday, he said he would not shield any member of his government, who would be found to be corrupt.

"The media, both print and electronic, are full of accusations of corruption but the proof is either very scant or none."

"The government will not allow itself to be distracted pursuing its objective of reviving the economy and putting the country back on an even keel."

President Kufuor referred to the World Bank loan now turned into a grant and said, even though, the Asantehene started the process for the facility during the time of the National Democratic Congress (NDC) government the media had made it look as if his government secured the loan for Asanteman.

He said the people voted for the New Patriotic Party (NPP) because they wanted to have absolute freedom and peace to be able to go about their normal duties without fear of molestation.

President Kufuor said within a short period of time the government has been able to achieve some measure of success.

The government has improved cocoa production due to the mass spraying exercise and the introduction of high-tech that involved the use of fertilizer.

This has raised Ghana from the fourth world producer to the second; "it is in the light of this that the government is adequately rewarding cocoa farmers through increased producer price and bonus".

President Kufuor said the government would not take Ashanti Region for granted because it is its ''World Bank'' and deprive it of development projects.

He said he was touring the Region to express appreciation to the people for their support and to ask them to continue to support and have faith in the NPP.

Otumfuo Osei Tutu called on Ghanaians to be patient and allow the full term of the government to run after which they could vote it out if they were not satisfied with its performance.

Otumfuo Osei Tutu told President Kufuor that his success would depend on truth and honesty and asked him to relate very cordially with his Ministers and other members of government so that together they could build an honest and truthful society.

The Asantehene called for a proper mechanism that would rope all those in the private sector into the tax net to enable the government to generate enough revenue to meet its development objectives. President Kufuor also called on the Asantehemaa, Nana Afua Kobi Serwaa Ampem.