Campaigning on hold after 20 dead in Cairo clash 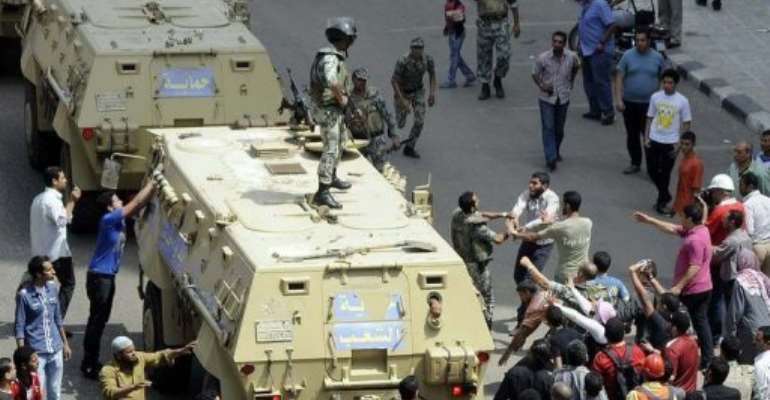 The army deployed troops in central Cairo to quell the clashes. By (AFP)

Four presidential candidates announced they were temporarily suspending their campaigns over the killings.

The Muslim Brotherhood's Mohammed Mursi told reporters he decided to stop campaigning for 48 hours "in solidarity with the protesters." The SCAF, as the ruling authority, was "the first to be responsible," he said.

His main Islamist rival, Abdel Moneim Abul Fotouh, cancelled all activity for the day, his camp told AFP, while leftist candidates Khaled Ali and Hamdeen Sabbahi also announced they were suspending their campaigns.

In a bid to placate the protesters against military rule, the ruling Supreme Council of the Armed Forces (SCAF) said it was ready to hand power to civilian rule on May 24 if a candidate wins the first round of the election.

The army had said previously it would hand over at the end of June.

The dawn assault sparked fierce clashes between the unidentified attackers and the protesters, who have been camping out to demand an end to military rule, with both sides hurling petrol bombs and rocks, the official said.

The army deployed troops in central Cairo to quell the clashes, a military source told AFP.

A doctor at a field hospital said 20 people were killed and dozens wounded.

Amr Mussa, a former Arab League chief and now a frontrunner in the race, said Wednesday's violence was "proof of the need to put an end to the transitional period according to the timetable, without delay."

The military chief of staff, Sami Enan, said the army may transfer power to an elected president on May 24 if the vote is decided in the first round.

The presidential election is scheduled for May 23 and 24, and a possible run off for June 16 and 17.

"We want to see the government of Egypt investigate these events and hold those responsible for the violence accountable. We obviously support the rights of all individuals to peacefully protest."

After clashes subsided in the afternoon, hundreds of protesters set off from Fath mosque in central Cairo towards Abbassiya, chanting "martyrs, in the millions, we are heading to the council."

"Down with military rule! The people want the ouster of the field marshal!" they chanted in reference to Hussein Tantawi who heads the ruling military council.

Leading dissident Mohamed ElBaradei, the former UN nuclear watchdog chief, denounced what he termed the "massacre" outside the defence ministry.

"SCAF & Government unable to protect civilians or in cahoots with thugs. Egypt going down the drain," he posted on Twitter.

The targeted protesters, supporters of Salafist politician Hazem Abu Ismail, have been camped out since Saturday after the electoral commission barred the popular hardline Islamist from contesting the election.

"There appears to be no will within Egypt's ruling Supreme Council of the Armed Forces to prevent these tragic events. After the weekend attack, the authorities should have been prepared for the violence."

On Sunday, one person was killed and 119 were injured in earlier clashes between Abu Ismail supporters and residents of Abbassiya.

The electoral commission on April 14 barred 10 candidates, including the Brotherhood's Khairat El-Shater and the former president's intelligence chief Omar Suleiman, from standing in the poll to choose Mubarak's successor.

Abu Ismail's nomination was rejected because his mother had taken joint US citizenship, but many of his supporters believe he was the victim of a "plot" by the authorities.