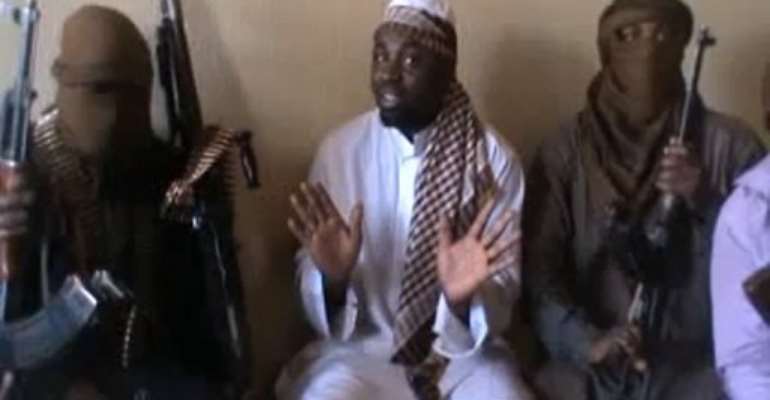 The YouTube video includes spoken threats against several Nigerian news organisations as well as the Voice of America and Radio France International services in the Hausa language, which is spoken in northern Nigeria.

The voiceover divides the news media into three categories. One is outlets that have already been attacked, namely ThisDay newspaper; the second groups those Boko Haram is ready to attack now, including VOA; and the third those on the verge of being targeted, including Radio France.

"These media outlets have committed serious crimes that are harmful to Islam, which we can't forgive," says the voiceover.

"We must take our pound of flesh."

At several points in the video, footage is shown of the suicide bombing of ThisDay's office on Thursday in the capital Abuja, where five people were killed -- a security guard, three passers-by and the attacker.

The video was shot from a distance, but a sport utility vehicle can be clearly seen entering the gate of the newspaper's office, followed immediately by a powerful explosion and a burst of flames.

A voice, apparently of the person filming, says "Allahu Akbar" (God is greatest).

Another portion of the video shows a person portrayed as the suicide bomber for the newspaper attack, at one stage holding an AK-47 assault rifle, at another time waving from inside a vehicle.

The authenticity of the video could not be verified, but it resembled previous clips said to be from Boko Haram and used footage of the group's suspected leader, Abubakar Shekau.

It was unclear who was speaking in the nearly 18-minute clip in Hausa.

The attack on Thursday was one of two targeting the media. A complex housing several newspaper offices, including for ThisDay, was also bombed the same day at roughly the same time, killing four people.

The bombings marked the first such attacks targeting the news media in Nigeria, Africa's most populous nation and largest oil producer, which has been hit by an onslaught of deadly violence attributed to Boko Haram.

ThisDay is one of Nigeria's most prominent and influential newspapers.

The video says it was targeted for misrepresenting Boko Haram as well as over a 2002 story on a Miss World pageant that was to be held in Nigeria, and which had generated strong controversy.

The story suggested that the prophet Mohammed may have wanted to pick a wife from the contestants, which contributed to deadly rioting in the country divided between a mainly Muslim north and predominately Christian south.

The writer left Nigeria in the wake of the controversy. The video said the writer "who committed this blasphemy is to be killed whenever the opportunity avails itself".

"God gave us this opportunity to carry out this attack on this newspaper and we will continue to launch attacks on them until they cease to exist," the voice in the video says.

No mention was made in the video of attacks on churchgoers on Sunday in the northern cities of Kano and Maiduguri which left 23 people dead.

The deadliest attack occurred in Kano, where gunmen opened fire and threw bombs at worshippers, gunning them down as they sought to flee. Security sources have confirmed 19 dead in that attack.

On Monday, a suicide attack targeting a senior police official's convoy in the eastern Nigerian state of Taraba killed 11 people and wounded 20. The video also fails to mention that attack.

Boko Haram's increasingly bloody insurgency has claimed more than 1,000 lives since mid-2009. The attacks on the media marked a widening of targets, which have included authorities, the United Nations and churches.