Sunyani Ready For May Day 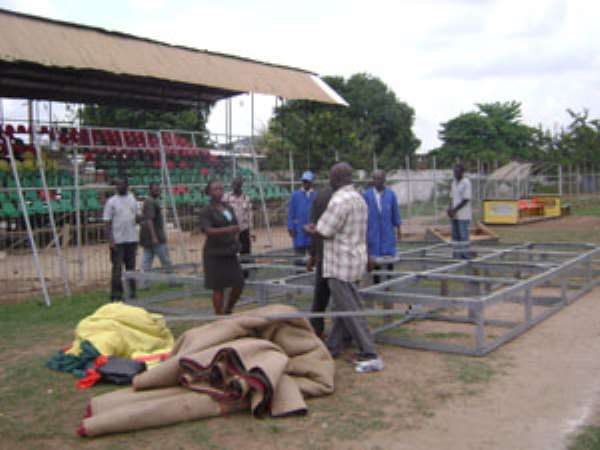 All is set for the Brong Ahafo Region to host the national celebration of May Day for the first time.

The ceremony, which is expected to be held at the Sunyani Coronation Park, will host about 30 different labour unions and their members from across the country.

The 2012 May Day National Parade, which is to be addressed by President John Evans Atta Mills, is under the theme 'Elections 2012: The Role of Workers in Securing Peaceful and Fair Elections'.

When  DAILY GUIDE  visited the stadium yesterday around mid-day, preparations were underway as various workers such as artisans, painters, electricians among others were seen busily adding finishing touches to the place.

The Brong Ahafo regional engineer of the Public Works Department (PWD), David Ahadzi, told newsmen that the organisers had almost finished with works on the grounds for today's event.

The regional minister, Kwadwo Nyamekye-Marfo, was also at the park to acquaint himself with the progress of work.

Hundreds of working people and labour unions will storm the principal streets of Sunyani this morning on a route march to create public awareness of the day and also express their grievances about their working conditions on placards.

The day has been set aside to take stock of the contribution of labour to the development of the world.

May Day originated from America when the Federation of Organised Trades and Labour Unions in 1884 passed a resolution at their meeting that all legal ways for their demand to reduce the working hours from 16 hours to eight hours had failed and, therefore decided to go on strike.

The movement gained momentum and on 1st May 1886, a strike call was given. The centre of this movement was Chicago. To foil the strike, additional police were hired, money for which was given by industrialists. For two days the strike remained peaceful. On 3rd May, near the McCormick Harvesting Machine Co. factory, police resorted to unprovoked firing at unarmed and peaceful demonstrators during which four labourers died and many others were injured.

The next day, on May 4, the organisers announced a big rally against the criminal action of the police at the local market square. The gathering was peaceful. When the last leader was delivering his speech, the police started firing at labourers and many of them died whilst hundreds were injured.

The police made an excuse that someone from the gathering hurled a grenade, which resulted in the death of one policeman. A fake case was registered against the Labour leaders and eight of them were sentenced to death.

Albert Parson; August Spize; Adolf Fischer and George Angel were hanged on November 11, 1887. Louise Ling committed suicide in jail. The remaining three were pardoned in 1893. In 1889, it was decided to declare May 1 as Labour Day.

On the first of May 1890, the first May Day was observed in the memory of the innocent martyrs of the Labour Movement. In the course of time, the day became the most important day of Labour movements and is now celebrated throughout the world.