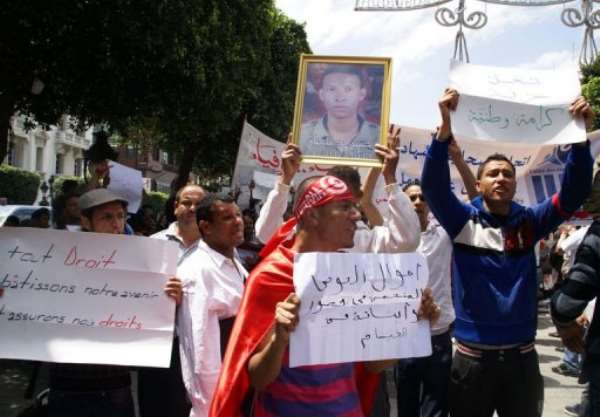 TUNIS (AFP) - Two young unemployed Tunisians attempted suicide on Monday outside the jobs ministry as hundreds of unemployed people marched on a main street in the capital demanding government action.

Protesters from the southwestern mining region have been camped outside the jobs ministry for two weeks, criticising the moderate Islamist government for not reversing the conditions that existed under ousted dictator Zine el Abidine Ben Ali.

Abdekrim Boulahya and Kemaies Saai, both from the mining town of Om Larayes, tried to hang themselves outside the ministry building on Monday before being rescued and taken to hospital.

A fellow protester filmed the act with a camera that was later confiscated by police.

Some who joined the sit-in outside the jobs ministry have threatened mass suicide over outrage at the unemployment in mining areas, which is nearly 50 percent.

"Work, Liberty and Dignity!" shouted the unemployed demonstrators in central Tunis, reviving the slogan used by the anti-Ben Ali protesters that forced the dictator's downfall in January 2011, an uprising that sparked the Arab Spring.

"The government changes, but the mines remain unchanged," read one banner, hoisted by people from a phosphate producing region.

A coalition of unions and activist groups urged the jobless to join a protest condemning the performance of the moderate Islamist Ennahda party that took office following elections last October.

The march, which began outside the offices of a leading trade union, was peacefully monitored by police after April 9 clashes between anti-riot units and protesters left more than 20 people injured.