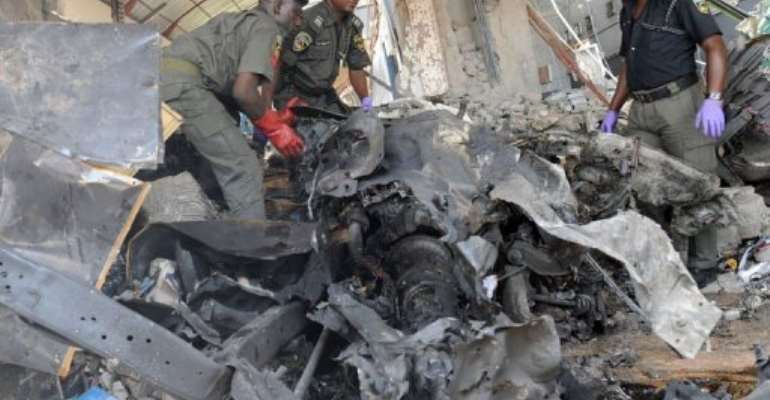 At least three passers-by and a security guard were killed in the attack. By Pius Utomi Ekpei (AFP/File)

ABUJA (AFP) - Nigerian President Goodluck Jonathan on Saturday toured the blast-damaged offices of a major newspaper hit by a suicide attack and pledged to do everything possible to end such violence.

Jonathan visited ThisDay newspaper's office in the capital Abuja after Thursday's suicide attack there which killed at least three passers-by and a security guard as well as the bomber.

An attack the same day and at roughly the same time in the northern city of Kaduna targeted a complex housing several newspaper offices, including for ThisDay, leaving a total of four dead there.

"I have always maintained that a terror attack in any part of the country is a terror attack on all of us and indeed the whole world," Jonathan told reporters after being shown the damage by ThisDay publisher Nduka Obaigbena.

"Because terrorists' method is to ensure they have maximum damage, that the whole world will begin to look at their direction for relevance ...

"And of course the media is now also a victim. And that is why we all as Nigerians, no matter what we do, where we come from, we must join hands in fighting this terror."

Thursday's bombings were the first such attacks targeting Nigeria's news media. ThisDay is one of the country's most high-profile and influential papers.

Islamist group Boko Haram, which has claimed responsibility for scores of attacks in recent months, had recently threatened the media in Nigeria, Africa's most populous nation and largest oil producer.

The alleged assailant in Kaduna was a suspected member of Boko Haram, police have said.

An attempt at indirect dialogue in March between Boko Haram and the government collapsed. Asked whether dialogue was necessary to stop the violence, Jonathan did not answer directly.

"You may dialogue, you may not dialogue depending on the circumstances," Jonathan said. "But we will exploit every means possible to bring this to an end."

"We will publish the truth no matter what. We will never surrender," he said.