Has Nana Akuffo Addo Found in Bawumia the Economic Magic Wand to transform the Ghanaian economy? 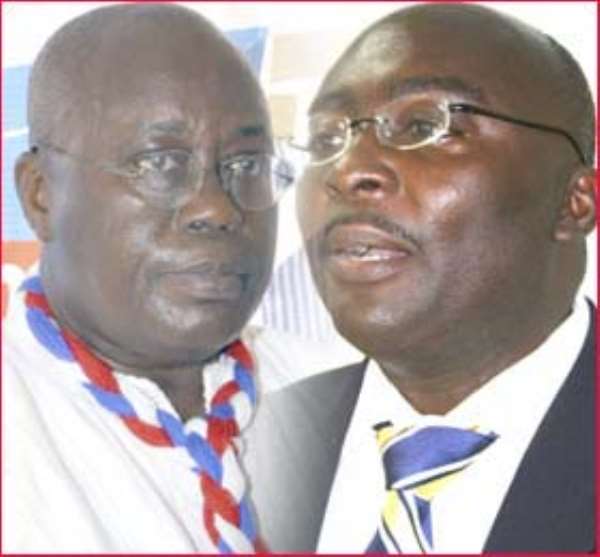 Nana Akuffo Addo has chosen Dr. Mahamudu Bawumia as his running mate for the 2012 elections. That may not be surprising news at all. What may be surprising is the assertion by some people that Bawumia's choice may be the “magic wand” with which Nana and NPP would wave to fix the comatose Ghanaian economy.

According NPP chairman economist Dr. Mahamudu Bawumia was picked to partner Nana Addo Dankwa Akufo-Addo as the New Patriotic Party's presidential ticket to help manage the national economy better. “But probably, more importantly, is that the greatest problem facing this country is the management of the economy, and using the economy to create the jobs that our young people need,” Mr Obetsebi-Lamptey has remarked.

Other people like social commentator, Mr. Kweku Baako, for example, have said the fortunes of this country are likely to change for the better with the experience and track record of Dr. Mahamadu Bawumia, the running mate of the flagbearer of the opposition New Patriotic Party (NPP). According to Mr Baako, Dr Bawumia's credentials of being hard working, committed, resourceful and economically inclined person indicates the possibility of a better economical turn over for this country.

Why the economy, one may ask? Or is it perhaps Nana and NPP are saying in their own way as Clinton used to say, “it is the economy, stupid?” If one may ask, what is the nature of the Ghanaian economy and what is wrong with it that needs to be fixed?

At the time of self-government in 1951, 82% of the labour force in the country was engaged in the informal sector dominated by subsistence agriculture/cocoa farming or petty trading while 18% was employed on a wage/salary basis in the formal sector. Two-fifths of those in wage/salary employment in the formal sector were in the public sector. After the short-lived attempts by the CPP administration under Kwame Nkrumah to transform the economy through industrialization, the structure of the economy is no different from what it was in the pre-independence years.

After nearly 30 years of World Bank/IMF prescribed programmes of ERP, SAP and HIPC, one of the over-riding consequences of these programmes in Ghana has been the shrinking of the formal sector and the expansion of the informal sector. The large-scale retrenchment of labour, coupled with the inability of the private business to provide formal sector employment for the emerging labour force has created a large pool of unemployed persons who have naturally gravitated towards the informal sector.

Both the P/NDC and and NPP have served as the two sides of the same coin that have foisted on Ghana the pervasive informal nature of the Ghanaian economy. Under both P/NDC and NPP administrations Ghanaian leaders have abdicated their responsibility for decision making to external forces euphemistically known as “development partners.” Rawlings and the P/NDC succumbed to Washington Consensus mandates of Economic Recovery Programme in 1983. Later, Structural Adjustment Programmes (SAP) were put into place and what little formal sector existed in the Ghanaian economy was SAPped through unbridled privatization and liberalization programmes that resulted in massive lay-offs of thousands of workers from the formal sector.

In 2001, the Kuffuor-led NPP administration, in which Nana Akuffo Addo served as a cabinet minister, gave the Ghanaian economy hiccups as the country was declared HIPC. The informal sector with precarious employment opportunities, high poverty levels, low productivity levels, and decent work deficits are widespread has become the “safety net' for the thousands of workers that were retrenched form formal sector employment.

For nearly 30 years of NDC and NPP rule the accepted norm is that the government should allow the private sector to be the “engine of growth.” NPP declared their rule as the “Age of Business.” The “Better Ghana” agenda of the Attta-Mills-led NDC administration has seen single digit inflation rate and “unprecedented double digit growth rates.” The reality still remains that Ghana is still a neo-colony with diminishing formal sector. So what new alternatives do Nana and his running mate, “Kokontiba” Bawumia have to offer that will transform the Ghanaian economy?

It is believed that Dr. Bawumia was one of the “brains” behind the re-denomination of the cedi in 2007. That exercise has failed to strengthen the cedi against other currencies, especially the US dollar. If Dr. Bawumia, as a monetarist from the Bank of Ghana could not convince the politicians to bite the bullet and institute some austerity measures, to rescue the cedi, how will he now Kokontiba as he is believed to be as a politician, get the NPP to exercise some fiscal restraint? What economic policies and programmes will he and Nana offer to transform the Ghanaian economy from the throes of informality to more formal sector employment in decent jobs? Will Nana and Bawumia rely on the private sector (for example, foreign direct investors), the public sector, or through relying on the so-called public-private partnership?

Dr. Bawumia is ardent follower of the economic perspective touted by the Washington Consensus. This perspective has been dominant viewpoint in Ghana since 1983 to the present. This viewpoint and the programmes and projects reflecting this kind of thinking such as ERP, SAP, and HIPC have made Ghana worse off. After over 25 years of World Bank/IMF prescribed programmes of ERP, SAP and HIPC, one of the over-riding consequences of these programmes in Ghana has been a shrinking of the formal sector and the expansion of the informal sector. Under SAP and HIPC programmes persistent unemployment, under-employment, and growth in precarious forms of employment have remained the central features of the Ghanaian economy. In these informal sector employment opportunities, poverty levels have remained high, productivity levels low, and decent work deficits are widespread.

The problem with Ghana is not the lack of novel ideas, nor the lack of brilliant economists. It is the lack of leadership with the political will to take the bull by the horns to curb trade and government budget deficits. In this regard, it is very useful for us as a country to remind ourselves of the following advice from Mr. J. H. Mensah, then Minister of Finance and Economic Planning said in 1970. Mr. Mensah said, among other things:

“The biggest constraint on the economic development of Ghana at the present time is the balance of payments. Next in importance is the shortage of competent individuals at the higher levels to plan, to develop, and to manage with steady efficiency specific areas of the nation's business. The third problem is the low level of agricultural productivity. There is no doubt that agriculture is most important single area of economic activity in Ghana, but the solution of the problem of low productivity in agriculture depends to a large extent upon the ability of our higher level manpower to plan and to carry out the transfer of improved agricultural technology to the countryside. To a lesser extent it also depends upon the availability of foreign exchange to finance an agricultural revolution.

“It is perhaps surprising that weakness in Ghana's high level manpower is regarded as one of her leading problems. Ghanaians have all been so used to think of themselves, with encouragement of foreign admirers, as possessing a very capable ruling class. Fortunately, the foreign commentators always add the rider, “in comparison with other African countries.” This of course robs the compliment of most of its meaning. The comfortable national self-delusion that Ghanaians are already a very competent and efficient people must be eliminated. When one watches the cruel ineffectiveness with which so much expensively acquired equipment is operated in Ghana, when one realizes the inability of most parts of our administrative and managerial machinery to deliver the high quality performance which is required for a more rapid pace of national progress, then one realizes that Ghana may possess an articulate and polished elite in comparison with other African countries but she does not yet possess the managerial resources for running a fully modernized country. If a conscious aim is made towards correcting this deficiency, there is no doubt that success will be attained in a relatively short period. It is the refusal or inability to recognize the existence of a problem that constitutes the greatest weakness, and it is hoped that with humility and realism, Ghanaians will acknowledge these deficiencies, and that in their travels round the world they will be observant to measure, to learn and to adopt the standards of managerial and administrative performance, the skills and the application that go to sustain a modern country.”

Ghana's development, or for that matter, Ghana's economic transformation is not the responsibility of external “development partners.” The onus is on our leaders to develop Ghana. They cannot shirk that responsibility.

One hopes Nana Akuffo-Addo will tell Ghanaians how the “magic wand” that Dr. Bawumia presents will be the solution to the problems of Ghana as Mr. J. H. Mensah has described in the above quote.