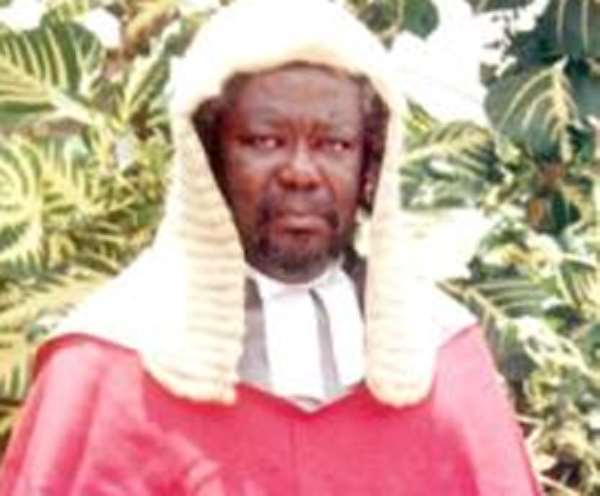 I cannot help but pity Justice F. Y. Kpegah, a man who clearly appears to be clinically stuck in a vindictive mode, and one that represents something far more dangerous than Mr. Kennedy Agyepong's recent anti-Ewe effusions (See “Mills Has Surrounded Himself With Law Students – Kpegah” PeacefmOnline.com 4/24/12).

The problem with the former Acting Chief Justice of the Supreme Court of Ghana, of course, is that Mr. Kpegah is in abject denial of the glaring fact that he has fully and totally exhausted himself of any relevance that he may have had vis-à-vis the development of the country's judicial system. And by his own admission of his total irrelevance to the grand political scheme and/or agenda of President John Evans Atta-Mills, Mr. Kpegah also clearly appears to have been completely shorn of any modicum of “post-professional” credibility.

Both his own family and the Anlo-Ewe chiefs, quite aptly sensing the increasing nuisance and embarrassment which the man has clearly become, according to Mr. Kpegah himself, have wisely admonished the jaded jurist to humbly recede into the more placid and befitting sunset of whatever may be left of his retirement days. Alas, Mr. Kpegah is a man who is too desperate to belatedly make his mark on Ghana's political landscape, being also rather too wistful about his epic failure to be named substantive Chief Justice of the Supreme Court of Ghana by President Mills, even after the former had fitfully and vengefully tendered his resignation to former President John Agyekum-Kufuor, in hopes of “nose-thumbingly” clinching that which had been wisely denied him.

Indeed, what rankles the fast-aging Anlo-Ewe chauvinist, retired judge and former law-school lecturer is far less the fact of President Mills having supposedly surrounded himself with “law students,” than fundamentally the fact that my good, old Uncle Tarkwa-Atta seems to have remarkably recovered at least a partial use of his balls and, with the latter, his marbles so as to no longer genuflect before the goofy and grizzled commanders of the Anlo Mafia, which is precisely why Mr. Kpegah recently found himself making such an infantile and pathetically jaundiced remark as the following a couple of days ago: “Take, for instance, the Deputy Minister for Information; he is a law student. Rawlings is older than those young men; the President has surrounded himself with them, but he does not take our advice on legal or political matters.”

The preceding plaint from the man who claims to have done far more to further the interests of the Anlo-Ewe-dominated ruling National Democratic Congress than any Ghanaian jurist to ever sit on the Supreme Court reeks of the obstreperously comedic, because Justice Kpegah's concept of judicial equanimity primarily hinges on the single-minded and relentless prosecution of the entire membership of the Kufuor cabinet till Kingdom come. And to hear the man smugly and self-righteously plagiarize former President Kufuor and Justice Wuaku on the Ya-Na tragedy convinces the forward-looking reader-auditor of the fact that, indeed, my good, old Uncle Tarkwa-Atta is almost a genius for leaving the aging Anlo-Mafia capo out of the loop.

The fact of the matter is that other than rascally whipping up Anlo-Ewe tribal sentiments against former President John Agyekum-Kufuor and, in fact, the entire membership of the main opposition New Patriotic Party (NPP), Justice Kpegah is next to absolutely useless when it comes to ideological creativity. In the wake of the Kennedy Agyepong faux-pas, for instance, the former Acting Chief Justice was widely reported to have fiercely riposted that the Anloga boys had had more than two decades to arm themselves to the hilt and had, in fact, long anticipated the Agyepong move and so were more than prepared to meet the New Patriotic Party Member of Parliament for Assin-North at the Teshie Military Range for a sharp-shooting test of wills.

What personally fascinates me about the man is the fact that Justice F. Y. Kpegah reminds me of the proverbial old woman in the attic of classical English literature. In this particular instance, however, the man reminds me of an old grandaunt of Akyem-Asiakwa while I was growing up in the late 1960s and early 1970s. She was the younger sister of my maternal grandfather, the Reverend T. H. Sintim. Legend had it that the husband of my grandaunt, a notably magnanimous gentleman in the Akyem-Asiakwa of the late 1930s and early 1940s, had suddenly and mysteriously expired; and then the old woman had slipped out of cognitive balance before anybody knew it. Well, that was the rather terse explanation offered me by my aunt, Adwoa Gyekyewaa, as to why the old woman, her mother, had been put under permanent lock-and-key.

Once awhile, Nana Obenewaa would be briefly let out to bask in sunlight in our courtyard. I guess what I am driving at is the fact that Justice Kpegah's family and those Anlo-Ewe chiefs who have wisely admonished him to “take a back seat and watch” my good, old Uncle Tarkwa-Atta do his own thing could take a cue or two from the story of my grandaunt. They could, for instance, fasten the legs of Mr. Kpegah to his bedstead and make sure that he does not set foot, butt-naked, into our public square to embarrass them, once again, anytime soon.