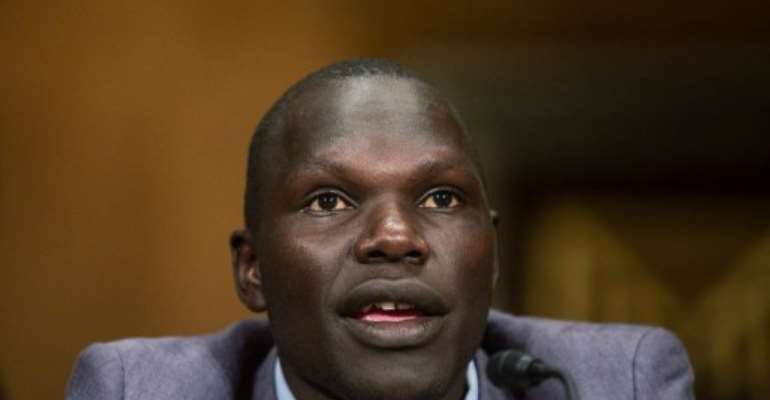 Jacob Acaye, a former LRA abductee whose story was highlighted in the recent KONY 2012 video. By Brendan Hoffman (AFP/Getty Images)

WASHINGTON (AFP) - The young kidnap victim at the center of a controversial online video went before a US Senate panel Tuesday to retell his ordeal at the hands of the Lord's Resistance Army.

"Being someone who was born during that war, I went through a lot," Jacob Acaye, abducted at the age of 12 from his Congolese village by the rebel group led by fugitive Joseph Kony, told the Senate Foreign Relations Committee.

"We are trying to forget what we went through, but it becomes so hard when you wake up in the morning and you hear that people are still being abducted in Congo... It takes me back to the situation where I was abducted."

Acaye, now a 21-year-old law student, was the central figure in "Kony 2012," which has been viewed nearly 100 million times since it was posted online by the US advocacy group Invisible Children.

Kony is wanted by the International Criminal Court in The Hague for rape, mutilation and murder of civilians, as well as forcibly recruiting child soldiers during his long-running campaign of terror in central Africa.

In his testimony, Acaye recalled how he witnessed his brother's execution, escaped after winning the trust of his abductors and met with the documentary team behind "Kony 2012."

Of his brother's death, he said: "They tied him -- they knew very well that he was (my) brother -- and they killed him in front of us."

On Monday, US President Barack Obama said he would prolong the mission of 100 US Special Operations Forces helping Ugandan troops scour thick African jungles for Kony in a stretch of jungle in the Central African Republic.

"This is part of our regional strategy to end the scourge that is the LRA and help realize a future where no African child is stolen from their family, no girl is raped and no boy is turned into a child soldier," Obama said.

Earlier this month, a group of senators led by Senate Foreign Relations Committee Chairman John Kerry introduced legislation to expand a US rewards program for international criminals to include those accused of mass atrocities.

Lawmakers did not mention a dollar figure for any Kony reward, but the current system allows for up to $25 million.

"We believe the US military advisers (in the region) have established a good foundation and made initial progress, especially considering the complexity of the operating environment, the number of partners involved, and the remoteness of the operational areas," Deputy Assistant Defense Secretary Amanda Dory said.

Jolly Okot, regional administrator for Invisible Children in Uganda's capital Kampala, thanked the United States for putting the hunt for Kony "on top of all the other issues" on its agenda.

"It means a lot to us that has shone that there's a lot of love for the people, especially the people of Northern Uganda, Central African Republic and Democratic Republic of Congo," she said.