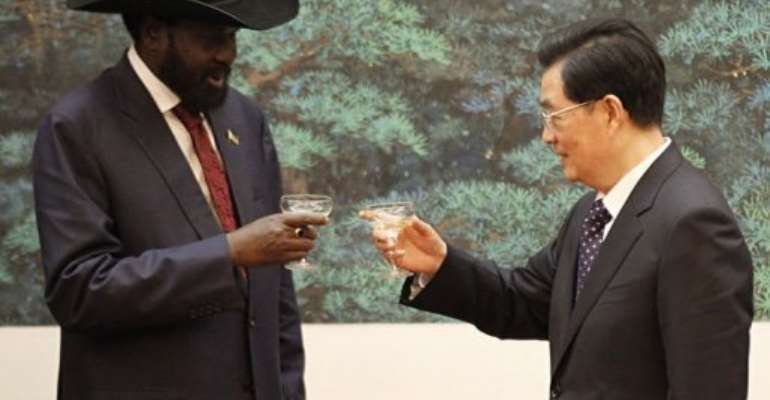 Several people were wounded in multiple air strikes on the villages in the South's oil-rich border regions overnight, reaching around 25 kilometres (15 miles) from the front line between the rival armies.

Salva Kiir, on a visit to Beijing where he met President Hu Jintao, said his "neighbour in Khartoum has declared war on the Republic of South Sudan."

Last week, Sudan's President Omar al-Bashir threatened to crush the "insect" government of the South, and said the time for talks was over.

Beijing -- a key ally of Khartoum but also the main buyer of the South's oil -- has repeatedly called for an end to weeks of border fighting, which saw the South seize and hold the key Heglig oil field from Sudanese troops for 10 days.

Despite the South's withdrawal from Heglig at the weekend, both armies are reportedly reinforcing troop numbers and digging into trenches along their contested border.

"There are wounded people who have been evacuated to Bentiu hospital, some of them are farmers, some are soldiers," Deng told reporters in Bentiu.

Khartoum has repeatedly denied it has launched air strikes on the South, but United Nations chief Ban Ki-moon on Monday deplored the cross-border air raids and called on both nations to prevent the fighting from escalating further.

Kiir was pleading his case to Chinese authorities, but analysts said Beijing was unlikely to take sides and would keep pushing for dialogue.

Border tensions are high, although Deng said that at present "with the exception of aerial bombardment, the front line is quiet."

However, Mac Paul, the South's deputy director of military intelligence, warned he had "information from our sources the Sudanese army is mobilising for a push on Bentiu," claims that could not be confirmed.

Bentiu lies at least 60 kilometres (40 kilometres) from the front line with Sudan's army, and large numbers of Southern troops and tanks have moved into the border zone to bolster defences.

South Sudan has warned it will fight back if Sudan does not end its aerial attacks.

Southerners are furious at what they see as international inaction against Khartoum, after they complied with the demands to withdraw.

"We were asked to withdraw from Heglig: we did. They have been asked to stop the aerial bombardment and incursions into South Sudan: they have not done so," Deng said.

"We are capable of defending ourselves, including going back to Heglig. ... I think you people should take us seriously on this. The underdog can also bite."

Sudan however accuses the South of supporting anti-government rebels from its conflict-hit western region of Darfur as well as those fighting in Blue Nile and South Kordofan states.

US President Barack Obama, while calling on Sudan to cease its aerial bombardments, has said South Sudan "must end its support for armed groups inside Sudan and it must cease its military actions across the border."

Kenya, which helped broker the end of Sudan's 1983-2005 civil war in which an estimated two million people died, called for a ceasefire, with President Mwai Kibaki stressing that Sudan and South Sudan "must not return to war."

The South, which split from Sudan in July 2011 following an independence referendum, denies backing opposition movements in the north, but in turn accuses Khartoum of supporting rebels in its own territory.

The recent violence is the worst since South Sudan won independence after the civil war.