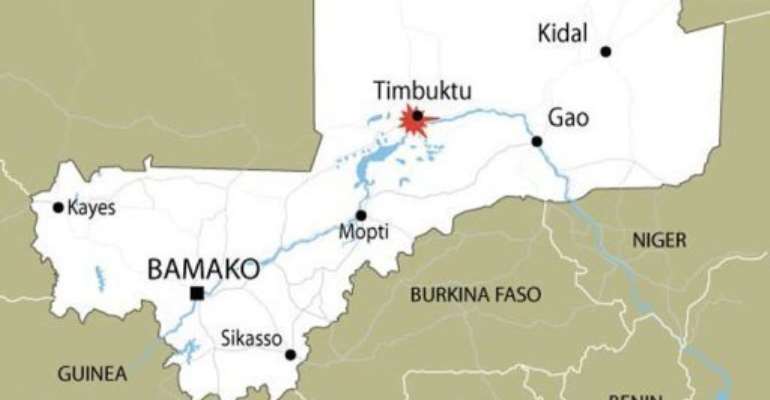 A Swiss woman abducted in rebel-held Timbuktu was rescued by helicopter. By (AFP/Graphic)

TIMBUKTU, Mali (AFP) - A Swiss woman who was abducted in rebel-held Timbuktu in northern Mali last week was released Tuesday and handed over to troops from Burkina Faso.

Beatrice Stockly, who is in her 40s, was brought to the meeting point in a pick-up truck wearing a black dress and turban before being quickly whisked away by helicopter, reported an AFP journalist, who was barred from disclosing further details until the aircraft left Malian airspace.

The Swiss foreign ministry thanked "all the people and the authorities who worked" on the operation, "in particular authorities from Mali and Burkina Faso."

Stockly was the last Westerner living in Timbuktu, where she worked as a social activist, and refused to leave after the legendary desert city fell to the Islamist Ansar Dine rebels on April 1.

She is "is fine, considering the circumstances," the ministry statement said.

Ansar Dine's assault on Timbuktu was backed by fighters from Al-Qaeda's north Africa branch known as Al-Qaeda in the Islamic Maghreb (AQIM).

A source in Timbuktu previously said Stockly had originally been in the hands of a private militia that wanted to sell her to AQIM.

Two sources in Timbuktu, speaking on condition of anonymity, said Sunday that Ansar Dine had battled the kidnappers for Stockly and were prepared to free her.

A loose alliance of Tuareg and Islamist rebels took advantage of the political chaos in Mali's capital that followed a March 22 army coup by capturing the country's vast desert north, including Timbuktu.

But that alliance has splintered since the initial offensive. Ansar Dine has sought to impose sharia law in areas under its control and has distanced itself from the Tuareg nationalist cause.

Security sources said Sunday that the Islamist group had rejected any intervention from humanitarian groups regarding Stockly, saying they preferred to deal directly with the Swiss government.

Switzerland's foreign ministry said Monday it was in contact with the group holding Stockly, but declined to discuss any pending rescue operations.

They then tried to move her further away from the city but were confronted by the Ansar Dine fighters who now control Timbuktu.

"There was an exchange of fire," said one source, and the kidnappers "were forced to abandon the hostage."

Following Stockly's release, 19 hostages remain in the hands of AQIM and an Al-Qaeda splinter group called Movement for Unity and Jihad in West Africa (MUJOA) in the Sahel.

Among them are seven Algerian diplomats abducted at gunpoint on April 5 from their embassy in Gao, another key northern Malian town under rebel control.

A MUJAO member told AFP by telephone on Tuesday that the group had agreed to release the prisoners following talks with Ansar Dine.

"We made an agreement with our brothers from Ansar Dine," the MUJAO member said.

In Bamako, the new leaders appointed earlier this month after the military junta agreed to stand down are struggling to form a transitional government.

Aside from re-establishing civilian rule, the government will also have to plot a strategy to reclaim the north from the collection of rebel groups that now control it.

The 15-nation west African bloc (ECOWAS) has floated the prospect of a military intervention, but the details of the operation are far from resolved.