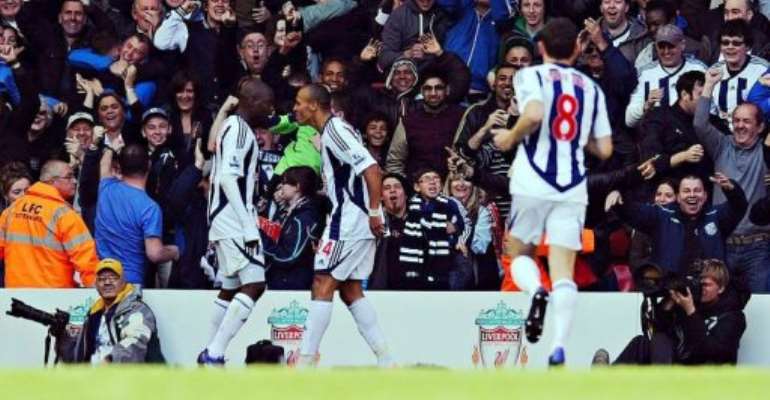 He snatched the lone goal 15 minutes from time as the 'Reds' once again flopped at home to lie an embarrassing eighth on the English Premier League table -- 37 points adrift of leaders Manchester United.

QPR and Morocco midfielder Adel Taarabt had a mixed day against former club Tottenham Hotspur at Loftus Road, scoring the winner midway through the first half and being red carded in the closing stages.

The Nigeria forward scored the only goal of the game as the Baggies ended their 45-year wait for a win at Anfield with a 1-0 victory over Liverpool. There were 15 minutes left when the Baggies, who had been under persistent pressure, saw Odemwingie strike after being played in by Democratic Republic of Congo midfielder Youssuf Mulumbu.

The Morocco midfielder scored what could be a priceless goal for Rangers in their battle to avoid Premier League relegation, securing a 1-0 win over London rivals Tottenham Hotspur -- his former club -- with a superb 25-yard free-kick in the 24th minute at Loftus Road. He was sent off for a second bookable offence 12 minutes from time but QPR held on.

The Senegal striker's impressive scoring run since joining from German club Freiburg in January continued as he made it 11 goals from 10 matches during a 3-0 win at home to Stoke that took the Magpies into fourth place. Cisse struck in between two goals from Yohan Cabaye when the French midfielder turned provider in the 18th minute, allowing the forward to beat Asmir Begovic with a first-time shot.

Having gone five games without scoring, Gabon star Aubameyang found the net twice in Saint-Etienne's 4-1 win at Caen to take his tally to 13 league goals this season. The 22-year-old set up his side's opener in the 40th minute with a left-wing cross that was turned in by Caen defender Aurelien Montaroup, before making it 2-0 on the hour with a 20-yard shot that goalkeeper Alexis Thebaux could only help on its way into the net. Aubameyang sealed victory in the 83rd minute with a header from Ivorian team-mate Max Gradel's dinked cross.

Senegalese international Camara scored the only goal of the game as Montpellier edged Valenciennes 1-0 to preserve their two-point lead over Paris Saint-Germain at the top of the table. Camara found the target in unorthodox fashion in the fifth minute, deflecting a fierce cross from his Moroccan team-mate Younes Belhanda inside the left-hand post from close range with his knee.

Mali striker Maiga scored for the fifth game in succession but saw his side slump to a 6-1 defeat against Paris Saint-Germain at Parc des Princes. Maiga got his name on the score-sheet in the 12th minute, cancelling out Javier Pastore's opener for the hosts by beating PSG goalkeeper Salvatore Sirigu to Marvin Martin's raking pass and scoring with a brave header. It was his ninth league goal of the season.

The Cameroon midfielder's long ball put Dutch striker Klaas-Jan Huntelaar away to score Schalke 04's equaliser on 38 minutes in their 1-1 draw at Augsburg after the hosts took an early lead. Schalke are third in the Bundesliga table, which carries an automatic Champions League qualification place, but only two points clear of Moenchengladbach with two games left this season.

The Morocco centre-back was largely at fault for the incident that should have proved decisive in Udinese's 0-0 draw at Chievo. Benatia hesitated and lost the ball in midfield leading to a Chievo break that resulted in a penalty. Cyril Thereau's spot-kick was saved by Samir Handanovic and Benatia's blushes were spared. He improved in the second half and was quite solid, but is no longer the rock he was in the first half of the season.

The Ghana midfielder provided one moment of ingenuity in the first half when his clever back-heel to Pablo Armero could have resulted in more of a chance but it went begging. Asamoah otherwise looked lost in midfield where Chievo controlled matters in a goalless stalemate. Asamoah's loss of form, like Benatia's, is a major reason that previously flying Udinese are now struggling.

The Ghana midfielder was a passenger at times in a disapointing all-round performance from his team in the 1-1 home draw with Bologna. Muntari did not give one of his better performances although he helped the side get a grip of the match in the second period when they started to take the ascendancy.

The Ivorian striker scored an important equaliser for Levante against the club who still own his registration, Sevilla, in the 1-1 draw between the clubs. The goal was his 14th in the league this season, making him top scorer for a Levante side that remain fifth and in contention for qualification for European competition next season.

The Algerian midfielder scored his sixth goal of the season as his Valencia side romped home 4-0 winners over Betis. Feghouli played a starring role in the victory and was responsible for Betis going down to 10 men in the second half when he was pulled down by Jose Dorado with a free run at goal.

The Nigerian striker played in Granada's important 1-0 victory over Getafe that all but guarantees the participation of the Andalusian club in the first division for a second season after their promotion last summer. Granada have fielded a number of African players this season, including Algerian Hassan Yebda, Senegalese defender Pape Diakhate and fellow Nigerian Ighalo Odion, but Uche was the only one involved at the weekend.