I. Coast leader in town hard-hit by post-election strife 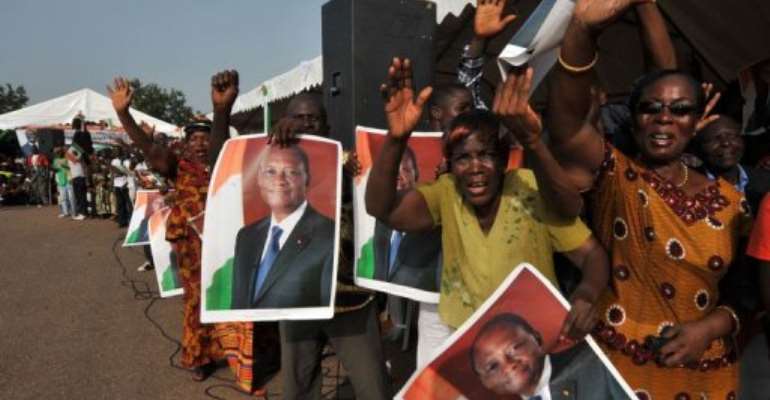 Supporters of Ivorian President Alassane Ouattara hold posters portraying him upon his arrival on April 22, in Guiglo. By Sia Kambou (AFP/File)

DUEKOUE, Ivory Coast (AFP) - Ivory Coast's President Alassane Ouattara arrived in the town of Duekoue on Monday for his first visit to the scene of the worst killings during the country's post-election crisis.

Thousands of people greeted Ouattara, shouting his nickname "ADO," as he arrived, accompanied by his French wife Dominique, at a square bedecked with a banner reading "Reconciliation Under Way in Duekoue."

The visit comes at the end of a three-day trip to the west, Ouattara's first time in the region since taking office in April 2011 after a political meltdown that saw months of fighting between his supporters and loyalists of ex-president Laurent Gbagbo.

Ouattara had planned to visit the west in October last year, but had to delay the trip.

"It's a sign of restored peace, because we suffered a lot from the crisis here in Duekoue. We are saying 'never again,' we want peace," Katogoma Kalo, a local businessman, told AFP.

A team from the International Criminal Court visited Duekoue on March 14 to investigate suspected mass graves that appeared to hold hundreds of people killed in late March 2011, when forces loyal to Ouattara seized the town.

According to the United Nations, some 3,000 people died in the violence that shook the Ivory Coast from December 2010 to April 2011 -- 1,000 of them in the west, a region bordering Liberia that is prone to ethnic tensions.

The region still faces security problems, and some 170,000 people displaced by the election violence are currently living there, the United Nations says.