Twenty-four metric tons of butternut squash ready for export to the U.K 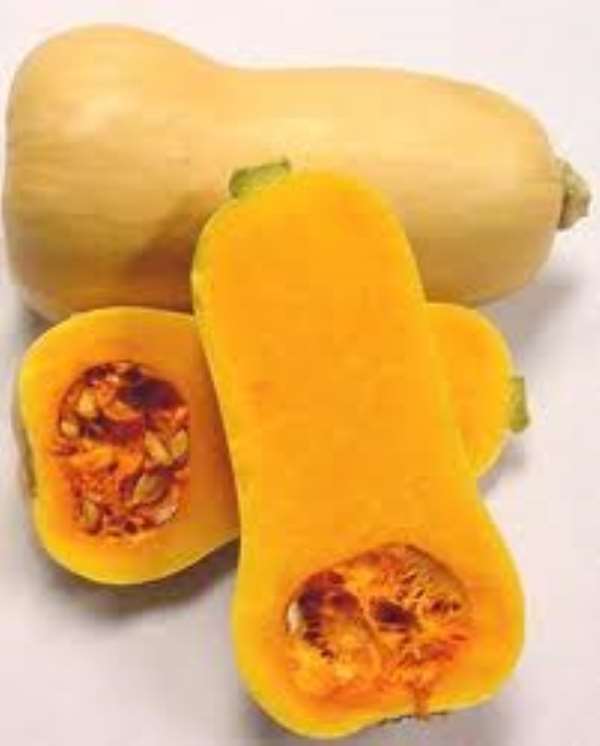 Koukobila (N/R), April 23, GNA - More than twenty-four metric tons of butternut squash produced by Mallam Seidu, a commercial farmer in the Northern region is ready for export to the United Kingdom this month.

Butternut is a vegetable that matures within a period of 100 days and contains high nutrients, and has a ready-market in the developed countries.

The butternut project is a partnership between the Northern Rural Growth Programme (NRGP) and the Savannah Accelerated Development Authority (SADA).

The aim of the project is to promote the cultivation and export of butternut squash in the Northern sector of the country as a strategy to increase the incomes of farmers and help reduce poverty.

Mr Roy Ayariga, National Coordinator of the NRGP disclosed this to newsmen when he and Alhaji Gilbert Seidu Iddi, Chief Executive Officer (CEO) of SADA and other officials of the Ministry of Food and Agriculture (MOFA) visited the 13-hectare farm at Koukobila in the Savelugu/Nanton district of the Northern Region at the weekend to inspect the preparation and sorting out of the butternuts for export.

He said the NRGP and SADA collaborated to provide seeds, financial and technical support, including the preparation of land and provision of equipment for the project.

Mr Ayariga said the NRGP was a 104-million-dollar agricultural project being co-funded by the International Fund for Agriculture Development (IFAD), the African Development Bank (AfDB) and the Government of Ghana.

He said the farmer also contributed towards the cost of operating the irrigation equipment and other farm related costs.

He said four other demonstration farms had been established by the NRGP in the Central Gonja District of the Northern Region, Jirapa and Lawra in the Upper West Region and Talensi/Nabdam in the Upper East Region.

The National Coordinator of the NRGP said the northern savannah zone had the appropriate climatic conditions for the large production of butternut, adding that his outfit also aimed at promoting the local consumption of the product.

He noted that farmers faced difficulties in marketing their produce and that the NRGP was taking measures to address the issue to ensure that farmers and other stakeholders benefited from the value chain process which included access to markets and financial support.

Alhaji Gilbert Seidu Iddi, CEO of SADA, reiterated that the Authority was not re-inventing the wheel but only collaborating with various stakeholders to add value to agricultural produce and make them competitive at the international level.

He said because of its high nutrient value the butternut squash would be added to the school menu under the government's school feeding programme.

Mr Davies Korbor, the 2009 National Best farmer who assisted with technical advice in the production of the butternut squash stressed the need for the proper handling and storage of the product to enable it to meet international standards.

He appealed to the government to construct more irrigation facilities to enhance the production of food crops and butternut squash which, he said, had a lot of potential to alleviate poverty in the three northern regions.

Why was the nurse not wearing gloves? - Ama K. Abebrese quiz...
15 minutes ago