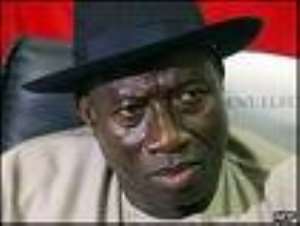 Impeccable sources have revealed that the President of Nigeria, Dr. Goodluck Jonathan, an Ijaw man and Niger deltan like Ogonis has decided to block efforts aimed at cleaning the degraded Ogoni environment. Although the United Nations Environmental Program (UNEP) revealed in its report of August 4, 2011, that the environmental situation in Ogoni needs urgent attention and intervention alongside immediate remediation and sustainable development. Sources close to the presidency said that Jonathan feels beaten that Ogoni, which was not known in the scheme of things in Nigeria, Rivers State in particular, where Bayelsa State that produced Jonathan was created, has emerged from nowhere to gaining huge attention from the world while the rest of Niger delta seems relegated. Another concern expressed by the presidency, the sources said, is that Ogonis have refused to allow the government to extract their sweet crude oil in the past 19 years.

Although these sources said Jonathan has on occasions acknowledged that Ogonis have paid huge price, and their nonviolent struggle has contributed to present-day consciousness and awareness that led to Niger delta militants of Ijaw ethnic group taking up arms extemporaneously, hence the threat that brought about his presidency. The president, sources say fears it will take some time for other Niger delta communities, which includes his Ijaw people to get their environment assessed and recommended for cleaning like that of Ogoni.

Consequently, President Jonathan, his team and the Nigerian cabal, which comprise of mostly politicians and rulers from the so-called majority ethnic groups have decided to block the cleaning efforts pending when the rest of Niger delta has been approved for assessment and work completed. This is inter or intra racism against Ogonis who have fought so hard and sacrificed their lives to get their degraded environment assessed. It is clear Ogonis are not against the assessment of the rest of Niger delta, but are angst that the current UNEP report specifically targeted Ogoni due to its peculiar situation and predicaments.

What the president and politicians fail to see is how Ogonis have been exploited, denied the right to their oil resource for more than 35 years. Even the current development efforts going on in Niger delta has been denied Ogonis because they stopped their oil from flowing, the sources declared. The government has failed to see that in the more than 35 years Ogoni oil was exploited, nothing but death and environment ruins is left for the people, as the UNEP report has also proven. Ogonis can still not use their economic resources of oil and gas to develop at their pace. This is due to governmental acts that contravenes international law, regarding indigenous peoples' rights to land and resources. Government has continued to encroach on the already scares Ogoni land and mostly barren due to pollution.

Meanwhile, presidential sources also have it that, $hell, the polluter and sponsor of the UNEP assessment is prepared to deposit $1 billion, which is the take-off fund for the cleaning in an account. The Nigerian government headed by Jonathan is on the other hand persuading the company not to worry until all other Niger delta communities facing similar environmental challenges in Ogoni have been assessed. These sources said, the president reasons that at such time when the UNEP has completed work assessing the whole of Niger delta, it would be prudent to deposit such take-off money which will then be more than $1 billion. If this government has problem working with $hell when the start fee is only $1 billion what makes it or anyone think any tangible achievement would be made when, for instance, the start fee might be $10 billion to cover the whole of the Niger delta? The best approach if government/Jonathan is reasonable is to start with Ogoni so that this will serve as a case study or road-map to succeeding in the rest of Niger delta.

Of course, $hell has over the years refuted allegations of environmental degradation in Ogoni. The company has nowhere to hide from this environmental catastrophe that is killing Ogonis faster than not. Although my source says $hell is willing to deposit the take-off money, it is also common with the company taking undue advantage of the envy and division, greed and corruption in Nigeria. $hell is also playing on its Joint-Venture business with Nigerian government, which makes the government hand and tongue-tight confronting $hell in any way. $hell has always and will of course demand that the government pay its share of whatever charges relating to environmental damages. The government technically is $hell's employer; the company is indeed foreign, though more powerful and influential than the Nigerian government, that it also can get away with murder.

In addition, presidential sources said that the UNEP has its games playing too. That is, it is the organization's wish that the political and ethnic, corporate games in Nigeria continue and end with the approval of the assessment of the entire Niger delta. This way, it will buy time (yet it says, in Ogoni alone it will take up to 30 years for the complete restoration of the environment) and have much work to do, and much claims to make about its efficiency in Nigeria and by extension Africa.

Conclusively, note, that the UNEP announcement of $1 billion as start fee for Ogoni cleaning was not based on any practical field work or calculation. It rather came from a discussion that was held between government officials, UNEP and $hell. The company, at this meeting mentioned that it will contribute an initial sum of $500, 000 and another $500, 000 would be contributed by the government and other sources. As a result the UNEP came up with this amount in its report as the start fee.

Following the above information and how the president of Nigeria, $hell have kept mute on implementing UNEP report, while Ogonis drink water that is 900 times high in benzene than World Health Organization (WHO) and Nigeria's standards. It is obvious more Ogonis will be (and are dying) from this ecological warfare very well orchestrated by the Nigerian government and $hell as an indirect way of committing genocide against Ogoni people. UNEP report has it that hydrocarbons contamination has penetrated more than six feet below the earth surface in Ogoni. The air, water, land and crops have been contaminated and destroyed. Life expectancy here is below 50 years.

The people have been killed for asking for a better treatment, and they are dying drinking water and eating fishes, crops from these pollutants. Breathing such contaminated air makes the situation worse. What is happening in Ogoni is genocide! This is because international law governing this egregious crime does not specify how many must die for genocide to occur. It rather stipulates that when a particular group of people are targeted for or are eliminated by a government, group (s), etc. genocide is taking place. Fifty years ecological warfare and hardship, army of occupation forced on Ogonis and government-$hell's silence on UNEP report are killing the people. This is genocidal!

Therefore, the only hope Ogoni has now, if at all is the international community. Ogonis hopes that the local , regional and international media and governments, environmental and human rights groups, other influential persons who truly care about human existence would come to there aid. Ogonis are asking that the international community intervene and save them from gradual extinction. Please, save the souls of Ogonis and their land; if nothing is done they will be extinct and this will be unfortunate!

Ben Ikari, is an expert on Ogoni/Niger delta struggles; a human and environmental rights activist, and the author of Ken Saro-Wiwa and MOSOP: The Story and Revelation.