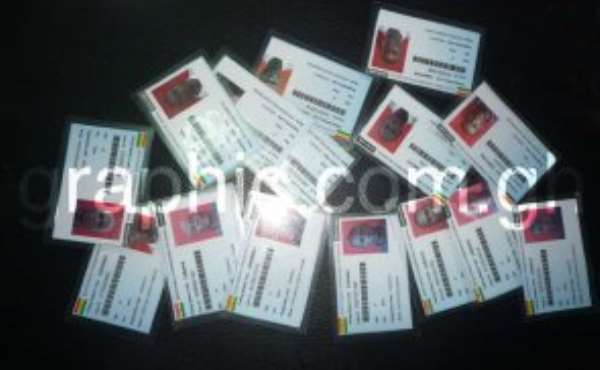 Emmanuel Archibald Laryea registered 15 times using different names and was issued with these15 voter cards. The man who registered 15 times in the ongoing biometric voters registration exercise, has been convicted on two counts of registering more than once and causing harm to a police officer.

Emmanuel Archibald Laryea, 47, who bit the thumb of a police officer in the course of his arrest, pleaded guilty on both counts Friday and informed the Accra District Magistrate’s Court in Ga that he committed the offence because his brain was worrying him.

His explanation drew laughter from the court and impelled a lawyer to plead on his behalf. The lawyer, who stood in as a friend of the court, also prayed the court to direct that the convict be sent to a psychiatrist for evaluation.

However, the Presiding Magistrate, Mr Ali Baba, disagreed with the lawyer with the argument that a mentally challenged person could not have had the wisdom to register 15 times with different names.

The court also held that a mad man was not capable of having 13 pieces of previous voter registration cards.

It said from the records, the convict had the penchant for double registration and consequently, remanded him till April 24, 2012 for sentencing.

Prosecuting, Inspector P. Y. Manu told the court that Laryea was picked up at the Naroda polling station at Sakaman in the Ablekuma North Constituency in Accra on Tuesday, April 17, 2012 at 10:30 am when he attempted to register for the 16th time.

Laryea, a labourer, ran out of luck when the electoral official detected that he had already registered at Tantra Polling Centre using a different name.

He, however, denied that when he was questioned and insisted that he had never registered.

He, eventually, admitted the offence after series of interrogation.

According to the prosecution, the registration officer at Naroda Polling Station, Mr Asare Baffour, called the police that they had in their custody a man who had attempted to do double registration with different names.

It said the fingerprint scanner detected that Laryea had registered on April 8, 2012 at Tantra Polling Station with the name Nii Laryea.

The police arrived at the polling station where Laryea had attempted to register the 16th time but he tried to flee and in the process bit the thumb of General Corporal William Afedo.

The convict was, however, overpowered and taken to his residence at Dansoman where the police discovered that he had managed to acquire 15 BVR cards using different names.