The Straw That Broke The Camel's Back For NPP 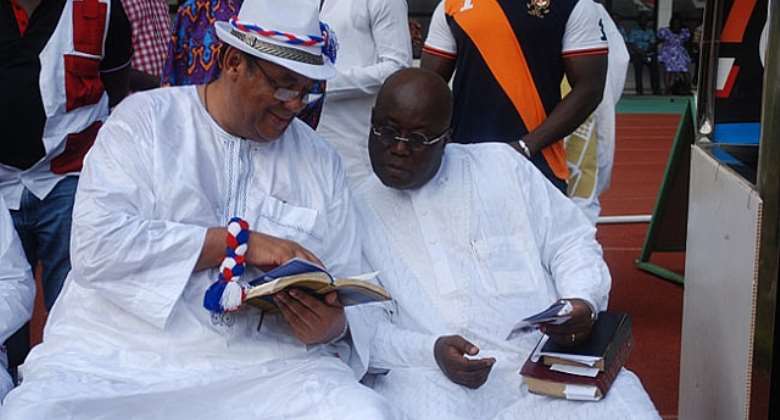 I have made my opinions consistently clear since I met Nana Akuffo-Addo back in February this year. Despite the names calling and the hate mails I received for making my views known, I maintained Nana will lose 2012 elections. Then I wondered how? Considering the noise NPP kept making regarding Woyome's saga. NDC, as noted well for, started its usual intimidation with this Odododiodoo's headlines regarding the ongoing biometric registration, then came to the assault of the NPP's female bulldozer, Ursula Owusu, then the killing of NPP's odorkor executive, etc. It certainly wasn't going well for NDC then suddenly came the straw that broke the Camel's back for NPP: Kill them all (the Ewes and the Gas)!

As an Ashanti myself, I have openly noted the tribalistic nature of NPP in all their endeavors. I wrote an article not too long ago titled “Exposed: The Problem With NPP Leadership” where I reiterated the perception and reality of the tribal game in NPP, using the 2007 presidential aspirants as an example with 18 Akans and 2 or 3 non Akans. The recent pronouncements by the no-good Assin North MP support my assertions. What a heck would any civilized individual, let alone honorable Member of Parliament, in this 21st century call for selective genocide by explicitly characterizing the victims by their tribe? This alleged suspect of this crime (treason as charged) must be expelled from NPP but my call, I know like others, will never materialize hence the painful loss to be suffered by NPP come December. It was interesting to read statement from NPP leaders attempting to condemn his actions YET these national leaders (Jake, Mike, Sir Johns, etc.) were the same people who flanked up at the court to show support for the embattled MP–- what a shame!

I have argued before that the (current) NEW NDC is smarter than the (current) OLD NPP. Let me put it another way, the OLD NPP team was smarter than the OLD NDC team; what about that? NDC, recognizing and acknowledging that fact, revamped its thoughts, structures, and team, leading to the OLD NDC team members calling the new NDC members team “B”. The gospel truth is that it is the NEW NDC team that will take Ghanaians to “heaven” despite the challenges. Until NPP equally puts up young and youthful leaders to match the Ablakwahs, Agyenims, Jamals, etc., the Marfos, Mpians, Agyapongs, etc., can never match the vibrancy and the political techniques being employed by these NDC team “B” who know enough not to call for the heads of fellow Ghanaians. To be fair, NDC plays the tribal game too; but as it appears only to win votes. We know this as a fact. However, never in the history of Ghana has NDC called for the killing of Ashanti (NDC's biggest opposition) or the Akyems or the Northerners. Not even Rawlings, the biggest Ghanaians killer, in history with his clearing house campaign called for killing of Ashantis or Gas. We have heard stories of Ewe resistance, prevention, and largely hate in Volta region for non-voltarians however not to the extent of killing Ashantis or non-voltarians.

When I heard the embattled MP's call on his own fm station, I said to myself “ he doesn't mean this!” The truth is that if this threat was to manifest and the genocide begins, I am sure there are Ashantis that will begin clearing Ashanti region of fellow Ashantis first for their wickedness and pain inflicted on fellow Ashantis. In fact, as an Ashanti, I would rather spill the blood of an Ashanti than touching a Ga or an Ewe because of the evil I have seen my fellow Ashantis do to fellow Ashantis [Albeit like many Ashantis, we've forgiven one another]. God forbid that any of these things will ever happen…never!

I commend the security apparatus for their swift move to apprehend the self-declared mafia for attempting to incite some unsuspecting Ghanaians against one another. The courts will eventually speak for Ghanaians with a deserving judgment. Another observation, because Nana Akuffo-Addo was the first to call for bloodshed to ensure his victory with the infamous “all die be die” stamp, he has lost the moral ground to condemn this call as evident in his silence on this issue… We understand, and we forgive him.

I call on all Ashantis, Ewes, Gas, etc. to rally for NDC for a second term. We will bring NPP back in 2016 when Alan “Cash” or Dan Botwe becomes the NPP presidential nominee (I bet these younger and appealing leaders are better alternative). Let us continue to spread the word: I'd rather be poor and live under NDC than to be dead tryin' to bring Nana Akuffo-Addo to make us rich. To my critics, I just renewed my 16yrs membership with NPP although I refuse to be called NPP fanatic who calls a spade a car. Thank you to my fans (PPP, NDC, NPP). I enjoy reading your feedbacks and support.