Chiefs back on top after seventh straight win 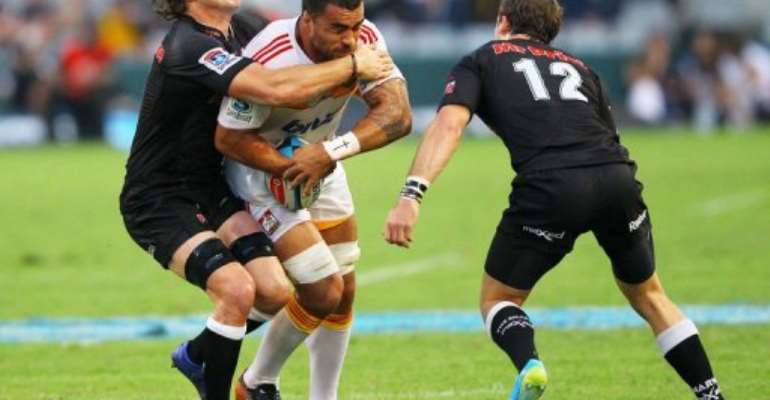 All Black Cruden scored a try which he converted and kicked two penalties for Chiefs to reclaim top place on the southern hemisphere provincial championship table.

The four points for the win enabled the New Zealanders to climb above Western Stormers to 35, two more than the South Africans nine rounds into a competition Chiefs came closest to winning in 2009 when finishing runners-up.

Sharks collected a bonus point for losing by less than seven and even that was in doubt just before the final whistle as Cruden lined up the conversion of an Augustine Pulu try, which veered left of the far post at Kings Park.

The Durban side remain ninth on the overall table and third in the South African Conference behind the Stormers and Northern Bulls, but could still figure in the battle for play-off spots having played six of nine games away.

"It is really satisfying to complete a tour of Australia and South Africa with three wins out of three matches -- something which does not happen too often in Super rugby," said Chiefs skipper and lock Craig Clarke.

"Our defence has improved a lot this season under coach Wayne Smith and we are working better as a team," he added of a team that has conceded only eight tries in eight matches.

Sharks captain and flanker Keegan Daniel refused to blame the humid conditions in the Indian Ocean city for the handling errors that often let his team down when they were close to the Chiefs try-line.

"Professional rugby players cannot offer that as an excuse. We committed far too many errors and must learn to finish off good approach work and not rely solely on penalty kicks for points."

Both teams kept the ball in hand for much of a physical first half with the first points not arriving until the 19th minute when Cruden went over for a soft try he converted.

He added a penalty before the Sharks got their first points with the last kick of the half when fly-half Patrick Lambie slotted a penalty to see his team trail 10-3 at the break.

Lambie kicked three more penalties during the second half and Cruden one as two sweat-soaked teams used the boot more, leaving Chiefs 13-12 ahead 13 minutes from time.

Sharks launched several promising attacks only to be let down by unforced errors and replacement scrum-half Pulu put the outcome beyond doubt with a stoppage-time blindside break and try in the corner.