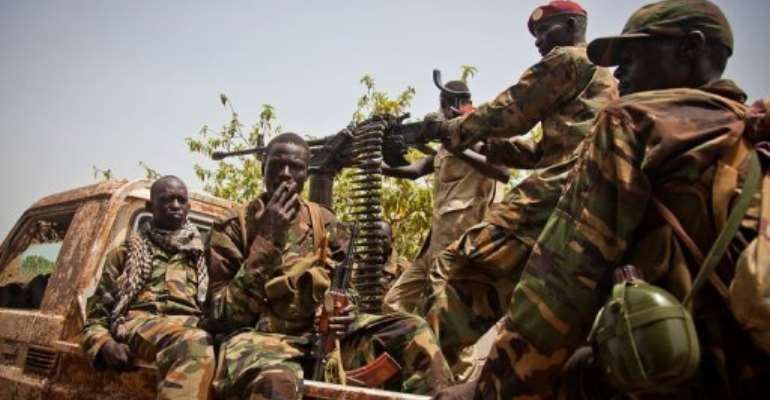 KHARTOUM, Sudan (AFP) - South Sudanese forces were continuing a pullout from Sudan's main Heglig oilfield on Saturday, an official said, as US President Barack Obama called on both states to have the courage to resume talks.

"We are responding to the request of the UN Security Council and others, as a member of the UN and the African Union."

While it appeared an end was coming to the 10-day occupation, which UN chief Ban Ki-moon branded illegal, each side had its own version of what was happening.

On Friday, Sudan said its soldiers had "liberated" the oil field by force, speaking after South Sudanese President Salva Kiir had already announced that "an orderly withdrawal will commence immediately."

Border clashes between Sudan and South Sudan escalated last week with waves of air strikes hitting the South, and Juba seizing the Heglig oil hub on April 10, sparking fears of a wider war.

Obama said late Friday that "the presidents of Sudan and South Sudan must have the courage to return to the table and negotiate and resolve these issues peacefully."

"We know what needs to happen -- the government of Sudan must stop its military actions, including aerial bombardments," he said in a videotaped message to the people of the two countries.

"Likewise, the government of South Sudan must end its support for armed groups inside Sudan and it must cease its military actions across the border," the president added in the address, released by the State Department.

South Sudan has denied supporting opposition groups in the north.

Sudan pulled out of those talks after the Heglig invasion.

Although South Sudan disputes it, Heglig is internationally regarded as part of Sudan.

Juba, which claimed Heglig was being used by Khartoum as a base to attack the South's oil-producing Unity state, argues Heglig is its territory and has asked for international arbitration.

At the UN, South Sudanese Ambassador Agnes Oswaha said Juba decided to withdraw from Heglig "because it does not wish to see a return to war and seeks an immediate resumption of negotiations between the two parties."

"Instability could reoccur" if international action for a full solution to territorial disputes is not carried out, she said.

Sudanese Ambassador Daffa-Alla Elhag Ali Osman said: "We will not aggress and cross the international border. We hope that they learned their lesson and do not repeat such an aggression."

Sudan released no casualty figures from the fighting and did not allow journalists or other observers into the Heglig area, so the situation on the ground has been difficult to verify.

The government on Friday night said it had organised a trip to Heglig for journalists. But an AFP correspondent who went to the airport in Khartoum early Saturday was told the trip was cancelled because Heglig's airport could not yet receive planes.

Juba's UN envoy said "journalists and international monitors are highly welcomed" to go to Heglig to see who is in control.

Since the invasion, production at Heglig has been shut and facilities there are leaking. Each side accused the other of damaging the oil infrastructure, which accounted for about half of the north's production.

The Heglig violence was the worst since South Sudan won independence in July after a 1983-2005 civil war in which about two million people died.

Tensions have gradually mounted over the disputed border and other unresolved issues.