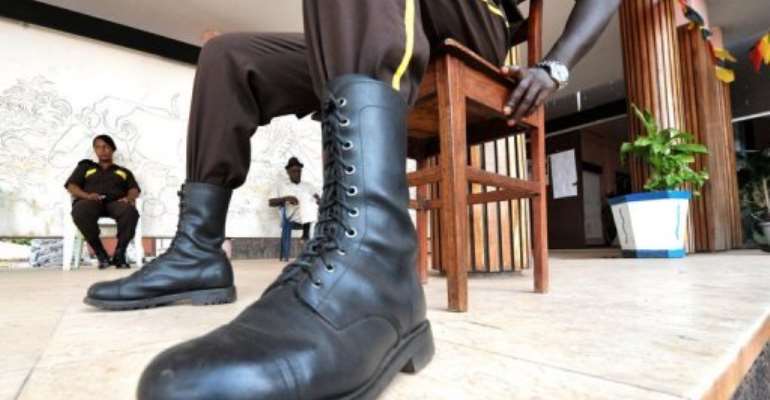 Guards at the headquarters of Guinea-Bissau's former ruling party. By Seyllou (AFP/File)

BISSAU (AFP) - Guinea-Bissau's junta vowed Friday to defend itself if foreign troops intervened in the country, as the international community condemned an "illegal" two-year transition government.

"Guinea-Bissau will not accept an intervention force because the situation does not require it. If a force is sent, the country will defend its territorial integrity," Lieutenant-Colonel Daba Na Walna told journalists.

"An intervention force assumes the presence of warring parties, which is not the case," he said.

The crisis will come under scrutiny at two separate meetings of the Economic Community of West African States (ECOWAS) next week, one in Conakry on Monday and another in Abidjan on Thursday which will also examine the crisis in Mali.

ECOWAS was taken aback by a deal struck between the junta and opposition for a lengthy return to civilian rule, and said it would never accept the transitional arrangement.

However the agreement appeared in disarray as the man named to head the transition, failed presidential hopeful Manuel Serifo Nhamadjo, said he had not been consulted about taking the post.

He did not however reject it outright.

Ousted foreign minister Mamadu Saliu Djalo beseeched the UN Security Council to send a UN-mandated stabilisation mission to the coup-prone former Portuguese colony, where soldiers ousted the government in the middle of an election process on April 12.

The 15-nation bloc and the Community of Portuguese Language Countries have considered an intervention force for the country of 1.6 million people.

During a visit to Angola Friday, European Commission chief Jose Manuel Barroso called for the international community to help end the crisis and make the dysfunctional state a "viable country."

"I hope to see a consensus emerge so that, beyond condemning the coup d'etat, we can identify the necessary steps to resolve or to help resolve this conflict," said Barroso, a former prime minister of Portugal.

Portugal's Foreign Minister Paulo Portas called for a visa ban and asset freeze on the junta and its political backers, who between agreed to dissolve the government and set up a transitional authority.

A few hours later Nhamadjo, the man announced as the transition leader after opposition parties said they had signed a deal with the junta, protested he had not been consulted on his appointment.

"Neither myself nor Sori Djalo (named to head the National Transition Council) were informed beforehand," he said.

He said he had sought an explanation for his nomination and insisted he was still the "practising speaker" of parliament, despite all institutions having been dissolved by the junta.

"As a democrat, I could not agree with the agreement signed with the military -- otherwise I would have applauded it," he said.

Excluded from the deal is the ruling party including presidential candidate former prime minister Carlos Gomes, who claimed the most votes in a first-round election before the April 29 run-off was aborted by the coup.

On Monday Alpha Conde, president of neighbouring Guinea, will host the leaders of Ivory Coast, Sierra Leone, Gambia, Benin and Togo at a summit on the crisis.

ECOWAS is planning a further emergency summit Thursday next week in Abidjan on the crises in both Guinea-Bissau and Mali.

On Thursday the body issued a statement saying it had "learned with surprise" of the plan by the junta and 24 opposition parties to rule for two years.

"The commission strongly condemns this illegal initiative, particularly after the junta had given a written undertaking ... to step aside to pave the way for the immediate return to constitutional normality with the facilitation of ECOWAS."

Since 1998, Guinea-Bissau has been through one war, four military coups and the murder of one president and four military chiefs of staff. No president has ever completed a full term in office.

This has allowed cocaine traffickers to exploit the struggling state as a transit point for cocaine being moved from Latin American into Europe.

The coup leaders said the ouster had been motivated by the government's growing reliance on a contingent of Angolan troops stationed in the country, which was seen as undermining the powerful army.

The international community has also called for the release of Gomes and interim president Raimundo Pereira, along with other top officials arrested during the coup.