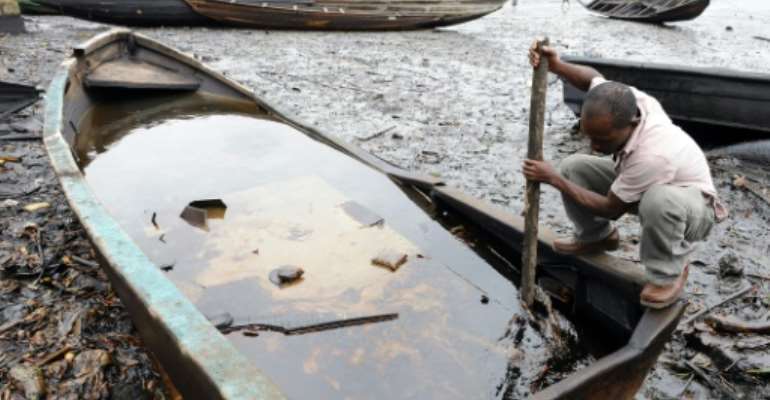 An indigene of Bodo, in Nigeria's Ogoniland region, tries to separate with a stick the crude oil from water in a boat at the Bodo waterways, polluted by oil spills attributed to Shell equipment failure, August 11, 2011. By Pius Utomi Ekpei (AFP/File)

Amnesty International accused the company of failing to match the Nigerian government's commitment to tackle spills in the Ogoniland area of the delta and urged the company to "dramatically" improve its clean-up operation.

"It is scandalous that Shell -- which now wants the world to trust it to drill in the Arctic -– has failed to properly implement the UN's expert advice on oil spill response after so long," Mark Dummett, a human rights researcher for Amnesty said in a statement.

Environmental devastation in Ogoniland has for many come to symbolise the tragedy of Nigeria's vast oil wealth.

Decades of crude production filled the pockets of powerful government officials and generated huge profits for oil majors like Shell, while corruption and spills left the people with nothing but land too polluted for farming or fishing.

Amnesty welcomed a trust fund to pay for the clean-up announced this week by President Muhammadu Buhari but said it would not succeed without major reforms from Shell.

"President Buhari's initiative will fail, and the Ogoni people will continue to suffer, as long as Shell fails to make significant changes to the way it approaches oil spill clean-up," Dummett said.

Shell has not pumped crude from Ogoniland since 1993, when it was forced to pull out because of unrest.

Two years later, environmental activist Ken Saro Wiwa, who had fiercely criticised Shell's presence in Ogoniland, was executed by the regime of dictator Sani Abacha, one of the most condemned episodes in the region's history.

Nigeria returned to civilian rule in 1999 after Abacha's death, but critics say the governments elected since have done little to improve pollution in the Niger Delta.

In August 2011, a United Nations Environment Programme (UNEP) report said the area may require the world's biggest-ever clean-up and called on the oil industry and Nigerian government to contribute $1 billion (around 920 million euros).

But Amnesty said its researchers investigating spill sites in the region had in the last few days found oil on the soil and in nearby water, in areas where Shell contractors were reported to have recently carried out remediation.

The trust fund announced by Buhari is to be overseen by the Ogoni people, the UN, the oil companies operating in Nigeria and the government, according to a statement released by the president's office on Wednesday.

It said "stakeholders" would contribute $10 million to the clean-up but did not identify who this would be.

"Ogoniland has been devastated by years of oil spills and Shell's clean-up operations have been utterly ineffective," Dummett said.

"In 2011 UNEP highlighted numerous serious problems with the way Shell cleans up oil sites. But we have visited multiple sites and found oil pollution lying all around. From what we are seeing, little has changed since then."

In April 2013, Shell staff returned to Ogoniland for the first time in two decades to study how best to decommission their decaying assets in the region.

The company described the move as "a key step" in complying with the UNEP report.

Nigeria is Africa's largest oil producer, pumping out roughly two million barrels a day, with crude accounting for more than 90 percent of its foreign exchange earnings.

Shell Petroleum Development Company of Nigeria (SPDC) did not immediately respond to a request for comment.