THE ACHEBEAN SOLUTION TO NIGERIA'S GENOCIDES 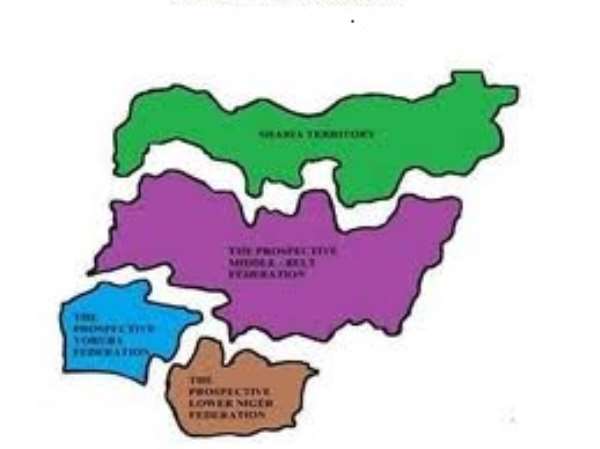 There are some people like Chinua Achebe who advocate for time over which there will be a considerable assimilation and understanding among the numerous different peoples and cultures within the Nigerian union. The unassailable answer to that line of reasoning which has a tinge of sophistry in it is; why wait for thousands of years when the problem can be solved in only one year. Achebe also believes that the impossible one-Nigeria is the issue of leadership. Well, we will let the reader to be the judge; but to help us judge correctly and if we are willing to exercise a reasonable level of objectivity it will not be difficult to be convinced on the truth that the Nigerian problem is all about a social structural defect and has nothing to do with any faulty leadership in any field. The truth is that a structurally defective state or institution is incapable of producing any sound leadership and leaders in any field of endeavor.

The Achebean solution to one-Nigeria's bent on perpetuating genocides on the Igbo ethnic people may appeal to those who favor the indolent route of least resistance. As we can still fault it further. Beneath that “solution” lies a very inordinate selfish reason too. When we talk about the society, country, state or nation we should be able to rise above personal feelings and get to the detached position of objectivity. We must be able to think ourselves out of and above the boxed-in limiting and minuscule picture of our little self and focus our lenses on the macro all-encompassing picture or the feelings and wellbeing of the collective. That in our opinion is how to be an honest and responsible opinion leader of one's people. Achebe's daughter is said to be married to a Yoruba man and it becomes easy to see why it is hard for Achebe to accept seeing his two families separated by the citizenship of two different countries. But such considerations are tenable as solution to such a heinous problem only on a short term basis and on selfish grounds. Achebe of course is not the only one in this personal moral dilemma regarding finding a lasting solution to the unending many genocides of the one-Nigerian state. But as we shall see as we go on, it should not be difficult for any of us in such social predicament to rationally balance the self with the collective's interests.

In the final analysis we must reiterate that, Nigeria as a country was never meant to be and, no matter anyone's initial sentiments, when they become honest and sincere they will always make peace with that truth. To Igbo/Biafran politicians and intellectuals they must realize that thinking about and working seriously at the aftermath of a divided Nigeria does not have to make anyone hate the others who within the enclave. In the same way, choosing to live separately does not mean that one hates their neighbors, which is why children and parents eventually go their separate ways. Relating as friends with separate identities does not automatically create enmity. Carrying a travelling passport that is different from those of your neighbor should never make anyone of you to go after the head of the other. We think about it in that light.

The most important cornerstone in nation building is the ability of the various units to come together and function cohesively and find, in the midst of the inevitable resulting frictions generated, lubricating agents such as the tolerance of each other that helps to prevent total breakdown of a society. Should any Igbo still insist on winning within one-Nigeria, we must let them know one important factor they maybe overlooking. For the Nigerian human population to blend together and attain the level of cohesiveness that brings about social functionality that serves as the precursor of progress, development and social security, there must be a visibly dominating culture to which the majority must identify with. For such a society to succeed there must be a voluntary surrendering of cultures and ways by all others and they must agree to take up a unanimous one and in the one-Nigerian context, who surrenders and whose culture will the others adopt?

Culture assimilation takes time depending on the assimilating method. There are mainly two methods; peaceful or non-violent and violent assimilations. In the case of the former it generally happens over a long period of time which, depending on other factors such as size of the population and the peoples' innate characteristics, it could take as many as thousands or at best hundreds of years to accomplish. Contrarily when it is through violence, it takes relatively shorter periods. And the size of violence also plays an important role here. The bigger the size of the destruction and atrocity then the quicker and more thorough will be the assimilation. Let's take for instance; the Biafra War. Nigeria would have worked if Nigeria had succeeded in totally annihilating Biafrans culturally. The Nigerian state would have succeeded if there had been a total defeat where the entire adult population of Biafrans had been decimated and the people's culture and language outlawed. (Did anyone shake their fist and swear, uttering some macho abracadabra? There is nothing wrong with that except that that is exactly what the present indulgent and carefree Igbo/Biafran leaders who have adamantly remained advocates for a one-Nigeria are literally asking for). But even that if it had happened would have been partial and would not have been enough to evolve a Nigerian nation. Removing sentiments, there is no reason to doubt that what would have built a functional Nigerian nation would have been a situation where there is a single culture that can defeat and totally destroy the rest weaker ones and absorb them into the victors' culture.

We have used this extreme illustration in making our case for the urgent need to partition the present one-Nigerian union because we consider the situation with the utmost gravity. It should also serve to prove to us the futility of and how ridiculous all the efforts which anyone that still believes in sustaining the one-Nigerian unity appears to the spectators and insiders alike.

At this point we want to believe that everyone here or who has read this till this point is not merely holding a passing interest in Igbo/Biafra's future, security and overall prosperity. We also want to believe that the hearer or reader is not merely interested in pointing out the flaws of our argument in contrast with their excellent knowledge of all things and in their glorious and mind-numbing expertise in semantics and theoretical academic discussions. We are completely convinced that together we are resolving to take seriously the issue of finding real workable solutions to the problem of this genocidal one-Nigeria and the place of Igbo ethnic people in it. It doesn't matter who you are or where you come from within the Nigerian union, everyone will eventually come to the same only true conclusion of the inevitability of Nigeria's disintegration. This truth will never escape any sincere and honest thinker on the Nigerian question with emphasis on finding real solution rather than simply whine and merely talk about the numerous problems. To all those who are genuinely and honestly committed to finding a permanent solution to the endless genocides in Nigeria, this truth of the need to dissolve the unworkable Nigerian union has remained self-evident and tenable.