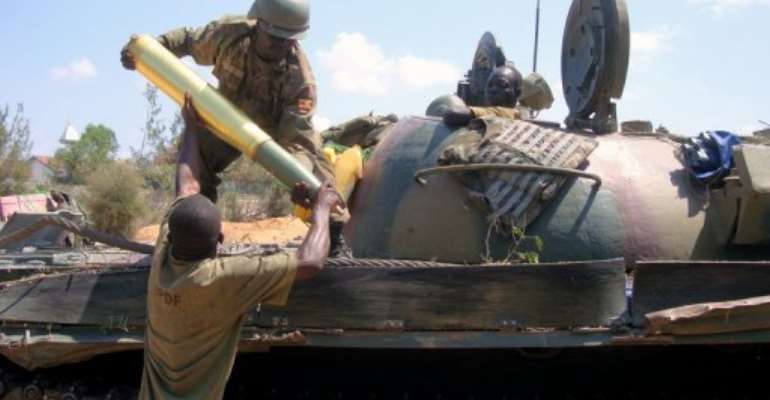 MOGADISHU (AFP) - African Union troops in Somalia said Friday they took control of Al-Qaeda allied Shebab insurgent bases on the outskirts of Mogadishu, the latest loss for the extremist fighters.

Burundian troops with the AU force seized areas of the capital's Banadir district late Thursday, including securing the Deynile airstrip, part of long-running efforts to drive the militants from the city.

"The operation was necessary to deny the extremists a platform to target the people of Mogadishu," the AU Mission in Somalia said in a statement.

Deynile commands access to the Afgoye corridor, an area some 30 kilometres (20 miles) northwest of Mogadishu which is controlled by the Shebab and is home to the world's largest concentration of internally displaced people.

Some 410,000 people, around one third of all the displaced people in Somalia, were still living in the Afgoye corridor at the start of the year, fleeing war or drought, according to figures from the UN refugee agency.

A regional offensive has forced the Shebab from many of their strongholds, with Ethiopian troops fighting in the west, AU troops in Mogadishu pushing to the outskirts of the city, and Kenyan troops battling in the south.

However, the Shebab say they have now begun setting up new bases in Somalia's northern Puntland region and deny being weakened by the assaults.

The rebels have launched a series of guerrilla attacks including suicide bombings since pulling out of the majority of their fixed positions in Mogadishu last year.

Analysts warn that the rebels, Somalia's most brutal, still remain a serious threat to international efforts to stabilise the war-torn country.