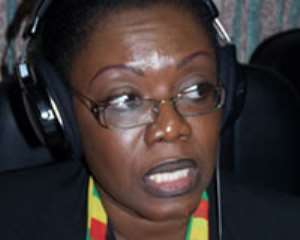 For 30 years and on every platform and regardless of the topic, Dr. Tony Aidoo has never hesitated to share his number one reason why he is supposedly in politics. As narrated a million times, Dr.Aidoo claims he was only six year old when he witnessed the murder of a woman by members of the National Liberation Council (NLM) led by its founder, Baffour Osei Akoto.

Each time the story is told slightly different. Sometimes you get the short version and other times, the long version but always with new adjectives and renewed passion-worthy of a stage actor. But is it possible that this so called life defining event, which supposedly traumatized poor six year old Anthony for life, is a dream up, make believe, a fantasy borne out of a fertile or repressed imagination? (Psychologists have an uncountable diagnosis for many such childhood traumas. We have no expertise so we would leave it at that.)

Under normal and respectful conditions, Dr. Aidoo's childhood trauma would have never come under scrutiny – though I have had doubts all along. But something has happened! For first time in the history of the public narration of his sob story, Dr.Aidoo did not bring up the murder of the woman when the appropriate topic, political violence, was under discussion.

On Radio Gold's political show, “Alhaji and Alhaji” this past Saturday, Dr.Aidoo did everything he could to cast doubts on the assault on Ursula Owusu. According to the Dr, he had seen other acts of electoral disturbances on the evening news that day. Yet there was no actual footage on the Oddodododio assault on TV. So to him, this lack of evidence was enough evidence that Ursula's beating was a hoax, simple and short.

He would conclude with the bemoaning of political violence by tracing its roots – erroneously as usual - to house of the UP tradition. But shockingly, his number one childhood experience – that has always followed his lectures on political violence- and testimony were not brought up to buttress his history. Did Dr. Aidoo forget his trauma?

Now the question that should be asked – fit for a psychologist- is why would a child, who went through a traumatic ordeal of political violence on women, grow up to cast doubts on a similar incident? If anything, Tony Aidoo should have been the first person to run to Ursula's defense based on shared experience- in the traumatic sense.

Whatever led to the omission and lack of support for and the denial of Ursula' assault, it has become very clear that Dr. Tony Aidoo has now lost his right to tell his “sob story” -again and again- on national TV and radio.

In the first place, unlike Ursula's assault - seen by hundreds with still pictures and media reports-there is no historical or journalistic collaboration of what Dr. Aidoo supposedly witnessed at age six. Number two, there is no way Baffour Akoto, at the age of 50 or so then, would have personally led armed men to attack a helpless woman with “fufu pounders” and other weapons of death-another version. Baffour Akoto was not coward. Number three, political violence was introduced into the Gold Coast by the CPP. And finally, the first blood spilt politically in Ashanti was the murder of NLM's Chief Information secretary, Twumasi Ankrah by the CPP Propaganda secretary, E.Y Baffoe.- so we know who really started it all.

All the above poke serious holes into Dr. Aidoo's traumatic history, rendering it a fairy tale aptly imagined by a six year old. We therefore call on our older brother to stop justifying his EXTREMISM and raison d'tre by an event with a lone witness. We are of the hope that he woud not tell that hollow story on air again… otherwise we shall be forced to meet at the court yard of the greatest psychologist of them all, Nyama- to defend the memory of Baffour Osei Akoto.