Seventeen Die From Cholera In Accra 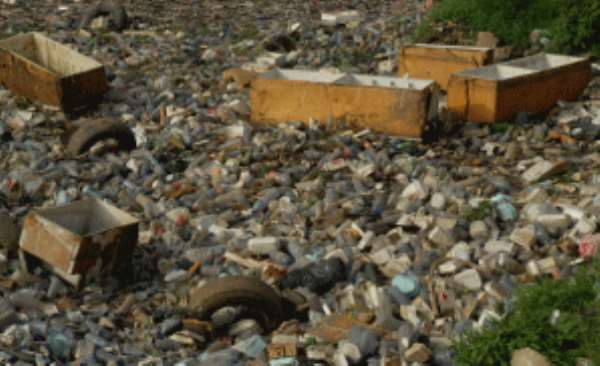 Such filth is a potential source of the bacterium which causes cholera At least 17 people have been confirmed dead from a cholera outbreak that rocked parts of the national capital in the past few weeks.

Additionally, 640 people, according to the Health Director of the Accra Metropolitan Assembly (AMA), Dr Simpson Anim Boateng, contracted the disease in the first quarter of this year.

So far, the Korle-Bu Teaching Hospital has recorded 132 cases; the 37 Military Hospital, 83, while 425 cases have been recorded in other hospitals.

Speaking with graphic.com.gh, Dr Boateng said six deaths had been recorded at the Maamobi Polyclinic, three each at Korle-Bu and the Adabraka Polyclinic, one at the Kaneshie Polyclinic, three at the 37 Military Hospital and one at a private clinic at Dansoman.

Eleven out of the 17 deaths were recorded in the last three weeks following a cholera alert issued by health officials a few weeks earlier cautioning residents to observe good sanitation to avoid contracting the disease.

Cholera is an acute infectious disease caused by a bacterium, vibrio cholerae, which results in a painless, watery diarrhoea in humans.

Some affected individuals have copious amounts of diarrhoea and develop dehydration so severe it could lead to death.

Most people who get the disease ingest the organisms through food or water sources contaminated with V cholerae.

Health experts indicate that although symptoms may be mild, approximately five to 10 per cent of previously healthy people will develop copious diarrhoea within about one to five days after ingesting the bacteria.

Severe disease requires prompt medical care.
The symptoms and signs of cholera are watery diarrhoea that often contains flecks of whitish material (otherwise known as mucus elial cells) that are about the size of grains of rice.

The diarrhoea is termed 'rice-water stool' and smells 'fishy.' People may go on to develop one or more of the following symptoms and signs — vomiting, rapid heart rate, loss of skin elasticity, dry mucous membranes, low blood pressure, thirst and muscle cramps.

The bacteria are usually transmitted by people drinking contaminated water, but it can also be obtained in contaminated food.

About 2,000 environmental officers are needed to effectively monitor and deal with people who flouted the AMA’s environmental bye-laws in the nine sub-metropolitan areas of the assembly but the AMA currently has only 150 which, according to Dr Boateng, was woefully inadequate to deal with the myriad of environmental challenges in the metropolis.

Cholera is generally caused by poor sanitation and in Accra the lack of standard places of convenience is responsible for the annual outbreak of the disease.

As of last year, less than 10 per cent of households in the metropolis had places of convenience in their homes.

Dr Boateng indicated that following the AMA’s campaign to get all households within the metropolis to provide the basic facility in their homes, the number had improved.