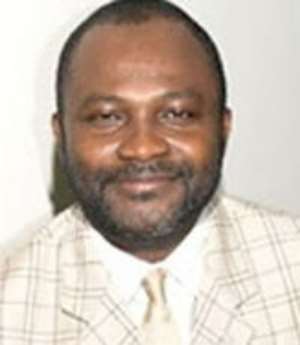 The man is the MP for Assin North. The man has a license to operate a Radio and Television station. The man goes on his radio station and needlessly raises the political temperature in a country preparing for crucial elections in 8 months by allegedly making comments that incite tribal war.

The man is invited to the headquarters of the police CID to assist in investigations regarding the explosive comments he is alleged to have made. The man could have declined the invitation but decides to honour it and shows up at the CID headquarters with his lawyers.

As has become a trend in Ghana since the emergence of multi-party democracy began in 1992, the man's party supporters led by high ranking party leaders besiege the premises of the CID headquarters and demand his unconditional release even before he is charged or released.

Indeed months earlier at the same premises a similar incident occurred when Mr. Alfred Woyome was arrested and detained by the police. Not to be undone scores of his supporters stormed the police headquarters to demand his release leading to the arrest of some of the illegal demonstrators.

Dear readers, these are worrying times and I write this article with a heavy heart. Indeed my heart bleeds for the land of my birth, the country we all love and call our motherland. Ghana, the bastion of democracy in Africa is in danger of slipping into lawlessness and political violence because political actors in this great country in their grand design to win political power are behaving irresponsibly and driving this nation to the brink of civil war.

Since the story broke Monday this week, it has elicited several comments. Even though most commentators have condemned the comments alleged to have been made by Hon. Kennedy Agyapong there were others who didn't see anything wrong with them. For those who disagree they claim that the police did not handle the situation in Odododiodio properly and that Mr. Agyapong's comments were meant to act as a calculated response to this.

Be it as it may how can we justify the actions of political actors who lead their supporters to besiege police and other security installations ostensibly to demand the release of one of their own who has been invited by the police to assist with investigations? Aren't the police the preeminent law enforcement agency in the country and so mandated by the constitution to ensure internal security and order in the country? Aren't the police institution and political parties both creatures of law and by extension the constitution of Ghana?

If that is so why would any self-respecting political party sanction its members to besiege the premises of a constitutionally mandated institution which is discharging its constitutional obligations to demand the unconditional release of one of their members? I just don't get it. Our political actors whether in opposition or in government are obliged to show respect to our state institutions because both find their locus in the constitution of Ghana.

Over the years however ample evidence abounds to support the position that respect for state institutions by our political actors have been few and far in between. And for me that is a travesty of the constitutional democracy we have practiced in this country for almost 20 years. Some short-sighted politicians for their selfish ends would clandestinely promote such culture of vigilantism in the country so long as it promotes their parochial interests.

It is the height of ingratitude when our political actors who owe their positions of privilege to the Ghanaian electorate, create and foment conditions in the country that could throw this country into a political maelstrom and imperil the lives of the same people who have put them in office to promote our collective interest.

Eight months to the December 7 elections there is palpable fear among Ghanaians that the election would usher us into a civil war of the similitude of Ivory Coast. Indeed the ominous signs are everywhere if you care to look. The ongoing Biometric registration program which is the precursor to the main election has already been overshadowed by politically orchestrated violence leading to some deaths and several other casualties.

The recent disturbance in Odododiodio where supporters of Presidential Staffer, Nii Lante Vanderpuye were alleged to have assaulted some members of the NPP can in no way be seen as a harbinger of peace especially at a time when we are seeking to consolidate democratic rule in our country. For all that is worth both parties in the area have since smoked the peace pipe and pledged to rein in their errant followers in order to safeguard and preserve the peace in Accra and the country at large.

The history of people illegally besieging police stations and other security installations in the country to demand the release of their members who have fallen foul of the law did not start today. Indeed since we began our journey to democratic rule in 1993 there has been several such incidents which should be condemned by all right thinking Ghanaians. This time round the central figure is a gentleman who has gained notoriety for his acerbic tongue and who is being investigated by the police for allegedly using same to incite tribal violence in this country.

This unfortunate situation can only happen in Ghana where possessing a membership card of a political party is viewed as a license to misbehave in this country. Political actors in this country act as if we live in a jungle where there are no laws. Aren't there elders in these political parties who should call their delirious followers to order?

As a country we are moving inexorably to the junction in our politics where any Tom, Dick and Harry can blatantly commit crimes against the State and still escape justice or face the full rigours of the law because he holds a membership card of a political party.

When state institutions are hamstrung in the performance of their constitutionally mandated assignments as we see in this country the people's confidence in these institutions whose activities are paid for by the tax payer begin to diminish. In the current political milieu where state institutions such as the police and other security agencies are being continually undermined and stampeded in the performance of their functions by the political actors in this country we allow lawlessness and impunity to fester.

When a politician falls foul of the law his supporters are quick to raise the specter of political harassment and intimidation to justify their call for his or her release. When an ordinary person without political clout commits a crime he or she is arrested and subjected to due process.

On the contrary, let a politician or an assign of a political party commit a crime and his supporters are railroaded to the police station to demand his release. Isn't this the reality in Ghana today? Can the lines be that blurred in the application of the law in this country?

Do we have an interest in strengthening our institutions, giving them teeth to bite and making them efficient or our desire is just to leave them to their own devices? We can do better.

That is why all right thinking Ghanaians must condemn Hon. Kennedy Agyapong for the explosive comments that media reports have attributed to him. With the situation of Rwanda, Burundi, Kenya and recently Ivory Coast where incendiary comments led to needless deaths and violence Mr. Agyapong could have calibrated his words a little better. Now he must be held responsible for his actions as an individual and be sanctioned as such.

In conclusion let me hasten to add that the Ghanaian voter is always the final judge of who becomes President of this country and those politicians who consistently undermine and disrespect our national institutions would only live to regret their actions. Whosoever disrespects the police while in opposition suffers a similar fate when they come to power. A word to the wise is enough.

*The writer is a freelance journalist, an author and the Executive Director of the Center for Investigative Reporting Ghana. He lives in the Ghanaian capital of Accra.