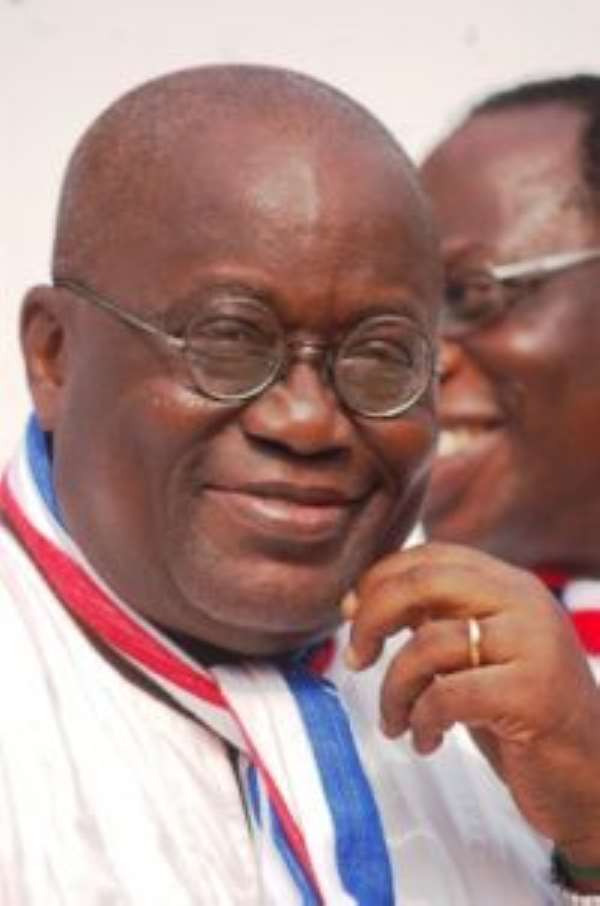 … As Dr. Mahamudu Bawumia Presents Himself to Nayiri

The Presidential Candidate of the New Patriotic Party has stated boldly in Nalerigu that his promise to make Education free to the Senior High Level would be fulfilled.

Nana Akufo-Addo was speaking during a courtesy call on the Overlord of Mamprugu, the Nayiri, which saw Dr. Mahamudu Bawumia officially present himself to the Overlord, 'his father', at the forecourt of the Na Sheriga Palace.

Nana Akufo-Addo noted that opposition and criticisms on the feasibility of making SHS free is to be expected and that it has become usual for some political opponents to cast doubt on any big idea that is proposed.

Nana Akufo-Addo indicated that these politicians were the same group who maintained that the idea of the Northern Development Fund proposed by the NPP in 2008 was not possible yet hijacked the idea, renaming it SADA, believing SADA was feasible to implement.

He added “as you all can see, these small minded people have even failed to implement the SADA” and assured the gathering that with Dr. Mahamudu Bawumia, by his side, the next NPP administration would see through its comprehensive programme for the North which would see, among others, Northern youths having quality jobs and a quality life eliminating any desire for migration to the South.

Nana Akufo-Addo took the opportunity to appeal to the indigenes of Mamprugu to register in the ongoing Biometric Voter's Registration to enable them partake in deciding the leadership best fit for the nation come December, noting that he has strong belief that come December, Mamprugu would lift up its son and help take out the current incompetent and corrupt government by electing the NPP into office.

The NPP Presidential Candidate described Dr. Bawumia as a brilliant, hardworking, loyal and a good partner to help in managing the affairs of the state competently and a worthy son of Mamprugu who shares his vision for Ghana, stressing that “we believe that with hard work and good leadership, we can create a society which produces quality jobs for the youth, is able to provide free education for all to the Senior High Level and meets the hopes of its populace”.

On his part, the Overlord of Mamprugu stated that it was with great pleasure that he was welcoming his son, Dr. Mahamudu Bawumia and thanked God for guiding Nana Akufo-Addo to make such an excellent choice again. He recalled the numerous benefits which accrued to the people of Mamprugu under the governance of former President John Agyekum Kufuor and the NPP and asked politicians to carry out their campaigns maturely devoid of insults and lies.

Dr. Mahamudu Bawumia indicated his joy for the huge welcome accorded him. He told the people of Mamprugu to remain united and together help end the politics of despair and incompetence which had engulfed the nation. He recalled a warning he gave in 2008 that if the NDC tried implementing a one-time NHIS premium paying scheme, it would lead to the collapse of the scheme and stressed that even after breaking that promise, the NHIS was still suffering and in dire times. He also asked the indigenes of Mamprugu to partake in the ongoing Biometric Voter's Registration exercise.

Alhaji Aliu Mahama, Former Vice-President urged the people of Mamprugu to vote the NPP back into office and to totally reject the NDC's politics of lies and deceit.

The Platform was used to introduce the four Parliamentary Candidates of the NPP contesting on Constituencies within the Mamprugu Traditional Council.