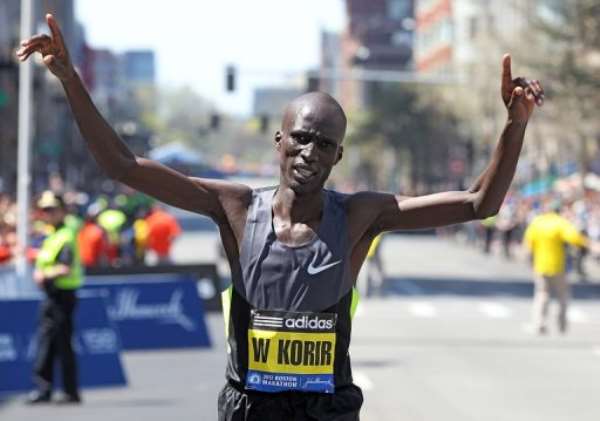 Korir won the slowest men's race since 2007 and second-slowest since 1985 in an official time of 2hr 12min 40sec, closing in the final mile to pass countryman Levy Matebo.

Matebo settled for second in 2:13:06, seven seconds ahead of third-place Bernard Kipyego of Kenya, with American Jason Hartmann fourth in 2:14:31.

Cherop led a Kenyan women's podium sweep as well, winning in 2:31:50 to edge Jemima Jelagat Sumgong by two seconds, with Georgina Rono third in 2:33:09. Ethiopia's Firehiwot Dado was fourth in 2:34:56.

The race gave top runners a chance to impress their homeland Olympic selection committees with barely three months to go before the London Games.

Korir, 29, was well off the personal best of 2:06:15 he set in finishing second to compatriot Moses Mosop in last year's Chicago Marathon.

The two-time Los Angeles Marathon winner is living in the United States and seeking US citizenship.

He is married to Canadian runner Tarah McKay and their daughter McKayLA's name combines his wife's maiden name and LA for his wins there.

Cherop, 28, was third last year at Boston in 2:22:42 and shaved three seconds off that time last January at Dubai for a new personal best. She collected prior marathon triumphs at Hamburg and Toronto in 2010.

Organizers had warned novice marathoners not to race over concerns about heat but a field of 22,426 started the 26.2-mile journey from 26,716 original entrants.

Defending men's champion Geoffrey Mutai, a Kenyan who ran the fastest marathon ever clocked last year at Boston and went on to win at New York as well, dropped out after 30 kilometers due to cramping.

Mutai won last year in a stunning 2:03:02 and followed up with a New York Marathon triumph in record time, but his Boston time was not recognized as a world record because the Boston course lacks proper change in elevation and has different starting and finishing areas to satisfy IAAF regulations.

Matebo, who won marathon titles in 2010 at Brussels and 2011 at Barcelona, seized the men's lead after nine miles and stayed with the lead group until, one by one, his rivals fell back.

Matebo pushed past Matthew Kisorio at Heartbreak Hill and stretched his lead to 17 seconds by mile 22, only to see Korir close on him in mile 24.

After a brief pass, Matebo fought back into the lead only to see Korir charge ahead for good with a sizzling closing effort.

Kenya's Caroline Kilel, trying to become the first woman to defend a Boston Marathon crown since Catherine Ndereba in 2005, led early and kept a slow pace until Cherop began pushing the pace at mile 18.

By mile 21, Cherop was joined by Sumgong and Rono, setting the stage for the second-closest margin in Boston women's history.

Canada's Joshua Cassidy set the fastest time ever clocked to win the men's wheelchair title in 1:18:25, two seconds under the old mark set in 2004 at Boston by South African Ernst Van Dyk.

Cassidy was the first Canadian to win the men's wheelchair title since Andre Viger in 1987.