T. B. JOSHUA'S MISSION TO MILLS 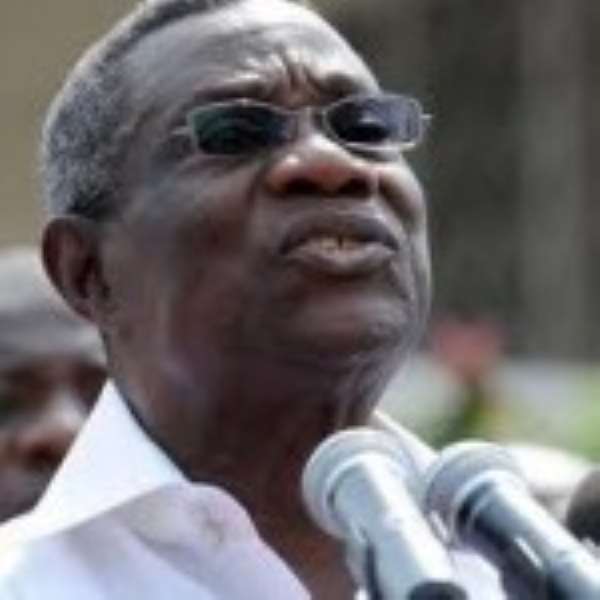 President Atta Mills
Prophet T.B. Joshua
The renown Nigerian Prophet of God, Prophet T. B. Joshua of the Synagogue of All Nations Church, who claimed to have predicted that an African leader was going to die this year, and which came to pass following the death of the Malawian president Bingu wa Mutharika, is in the news again.

This time, Prophet Joshua insists he predicted the downfall of the former Ivorian President, Laurent Gbagbo. Speaking on his Emmanuel TV, which was rebroadcast by Crystal TV in Ghana yesterday, he said when the Ivorian crisis was simmering, a delegation of the former Ivorian president came to him, but he made them to understand that he did not see Laurent Gbagbo on the seat at the presidency.

With a lady, who claimed to be among the emissaries that came to him, standing beside him, Prophet Joshua told the congregation that after he had stated the fact to the Gbagbo people, they told him that they were on their way to Ghana to see President Atta Mills to discuss the crisis in their country with him.

According to T.B. Joshua, after the delegation disclosed to him that they were on their way to Ghana to meet President Atta Mills, he told them to deliver a special message to the Ghanaian Head of State.

The message was that Gbagbo would not survive on the seat as president of Ivory Coast, and that he (Mills) should advise his colleague president to step down. With the lady admitting that she, indeed, called on President Mills to deliver the message to him, T. B. Joshua said information he had after Gbagbo's team visited Mills, was that he (Mills) did not joke with his prophesy.

He quoted President Mills as telling the delegates: 'Aas for that man (Joshua), whatever he says, believe it.' According to him, President Mills, upon the receipt of his prophesy, summoned the then Ivorian ambassador to Ghana to his office, and asked him to go back to Abidjan to deliver what he (T. B. Joshua) had prophesied.

Prophet T.B. Joshua did not, however, tell his congregation whether former President Gbagbo accepted his prophesy or not, but the lady, who stood by him he as narrated the story, admitted to the worshipers that she indeed delivered the message from the prophet to President Mills at the Osu Castle, and that what the Prophet had just told the was nothing, but the whole truth.

President Mills has openly admitted that Prophet T.B. Joshua played a crucial role on his ascension to the presidency.

According to him, the Prophet told him that the election would travel to the third round before he would be declared the winner, which came to pass. It, therefore, came as no surprise, when the Synagogue Church of All Nations was the first church he visited in Nigeria, after the Electoral Commission had declared him winner of the 2008 election.

A couple of months ago, The Chronicle spotted the newly-appointed President of Malawi, Joyce Banda, who was then the vice president, giving a powerful testimony about what Prophet T.B. Joshua had done for her in her political career.

Surprisingly, she has now become president after the death of Bingu wa Mutharika.